A major role in the marching band

Twirlers work hard to add to the band's performance 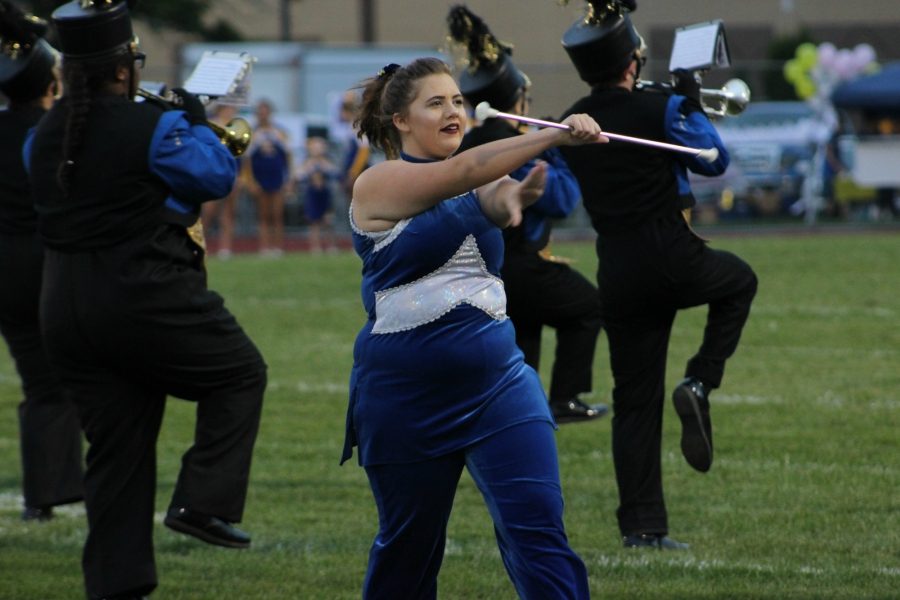 Sophomore Tylar Clemente is one of B-A's twirlers.

Friday nights are a big deal for everyone.  Blue Devil football players dedicate hours of practice to give the stadium lights something worth shining for.

Then when  halftime hits, the twirlers take the field.

Bellwood-Antis has a twirling team of five dedicated gals who are all about baton. If the band is  the halftime cake, the twirlers are the icing.

The team consists of juniors Danielle Coakley, Jamie Dailey, and Diana Pierce, and sophomores Meghan Maynard, and Tyler Clemente. The fierce females are led by their coach Mrs. Scarlett Kennedy.

“This is my third year working with these girls and I have enjoyed watching them grow, not only as majorettes but as young ladies,” said Mrs. Kennedy. “They work hard but they like to make practice fun while working hard to improve each week.”

“When you go on the field, you get a rush of adrenaline. It’s scary but fun,” said Jami. “Being able to go to the football games” is one of Jamie’s favorite parts of twirling.

It’s not all fun and games either. To make each trick look effortless, the girls put in hours of work each week: “At least an hour everyday so we can remember the routines,” said Jami.

The twirlers are even required to attend a summer camp session with the marching band consisting of a week of five-hour practices in June, and another two weeks in August.

For some twirlers, the activity is bigger than Friday games. Junior Diana Pierce twirls simply because she loves it.

“Once you learn the basics, most tricks are easy. They appear harder,” said Diana.

Diana has twirled since she was four years old and began twirling for B-A when she was in fifth grade.

You can see the Bellwood-Antis twirling team perform every Friday night to any one of the B-A band’s songs from their “Night at the Movies” selection.

Mrs. Kennedy said the process of building a majorette squad is quite rewarding, and noted that anyone who wanted to join could still do so.

“In the beginning it could be frustrating but as they grown more comfortable with the routines it shows,” she said.