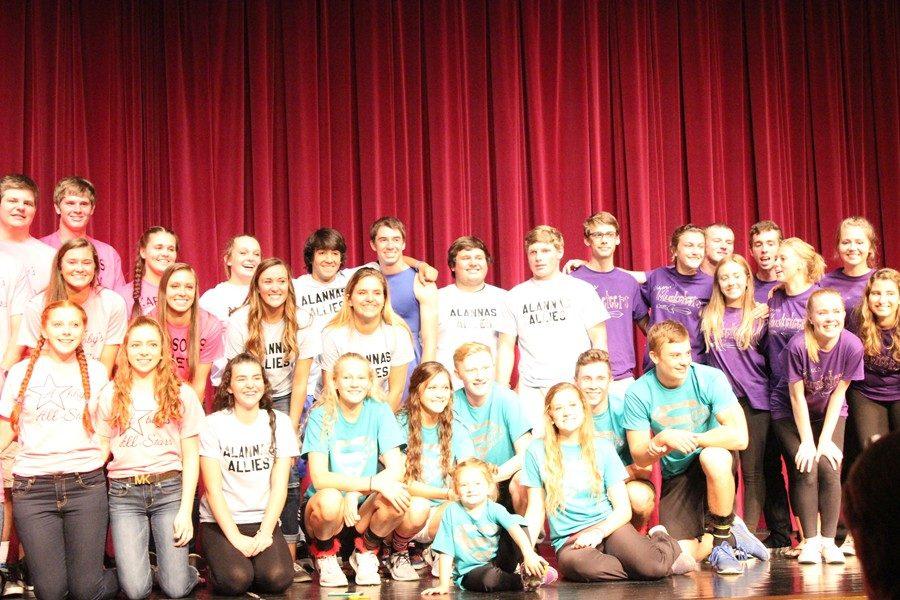 The six Homecoming candidates and their teams put on an amazing show at Skit Night.

Wednesday night was the annual Skit Night at the high school auditorium for the 2016 Bellwood-Antis Homecoming court.

Skit Night is a night where the homecoming court and their crew get in the spotlight and show the community what they’re all about through an improvised skit of their own creation. It was nothing short of fun.

The evening was kicked off with Saige McElwain’s rendition of “The Petty Cheer” where Saige along with her best friend Shayla Branstetter got out the old B-A cheer leading uniforms to give the best halftime performance ever. The best part? Saige’s back up dancers Noah Brennan, Caleb Royer, and Matt Glunt suited up too, wigs and all.

Saige’s performance was followed up by Soph’s Superheroes, where the skit was a head to head competition between heroes with a common goal of winning the chance to be Sophie Damino’s homecoming escort. The winner of course was Superman, Nevin Wood.

“It was a great experience with all of my friends,” said Sophie. “I’m very fortunate.”

After Sophie’s Superheroes swept the stage, Abby’s All-Stars got back to the books with “Are You Smarter than a Fifth Grader?” where Jarryd Kissel, Karlee Feathers, Sydney Lechner, and Jacob Hoover went head to head with Abby herself, only to lose all the winnings to what could be Friday night’s homecoming queen.

“Skit Night is one of the best parts about being on the Homecoming court,” said Abby. “I got to make unforgettable memories with all of my friends. I will always remember the experience.”

Following Abby’s All-Stars Karson’s Krew took the stage. Karson Swogger’s skit was a competition between several high school students with a panel of judges to decide who is worthy of escorting Karson to prom. Jarrett Taneyhill, Ethan McGee, and Andrew Hale simply couldn’t compare to Tanner Worthing in the judges’ eyes.

Next in the evening’s lineup was Alanna Leidig and her alliance. With the help of Nate Friedenberger, Alexis Gerwert, Alexis Kensinger, and Brendan “Brendina” Kowalski, Alanna put on a magic show that consisted of a disappearing guinea pig, the chopping of a wood block by Duke Brunner, and even the internet-famous Water Bottle Flipping Challenge.

Last but certainly not least was the show stopping Misera’s Musketeers. Brayton Coover told the tragic story of how the Wood’s family dog, Princess Bell, had gone missing. The three Musketeers Grace Misera, Addison Clemente, and Haley McCloskey, took it into their own hands to save Bell Wood from the horrid bandits Stephanie Mills, Myranda Mamat, and their leader Ryen Beam. It came down to an epic sword battle between musketeers and bandits, with the Musketeers reigning supreme. In the end, Grace had saved dearest Bell Wood, winning the best skit of the night.

“I’ve been a part of Homecoming Skit Night before, but to be doing it with my friends was amazing,” said Grace. “It’s all about being silly and not being too serious.”

After the skits were concluded, the ladies of the court and their escorts played some games to get them excited for homecoming. The girls got to get their escorts homecoming ready with a makeover, only the girls were blind-folded the entire time, further complicating the already difficult situation that is putting makeup on a boy.

The second game was a cookie challenge from “Minute to Win it” where a cookie was placed on their foreheads and without the use of their hands had to move to their mouths in under a minute. Seth McCaulley had won the game in the mere first seconds.

The final game was a series of balloon popping.

The 2016 Homecoming queen will be crowned at halftime of Friday’s football game against Moshannon Valley.