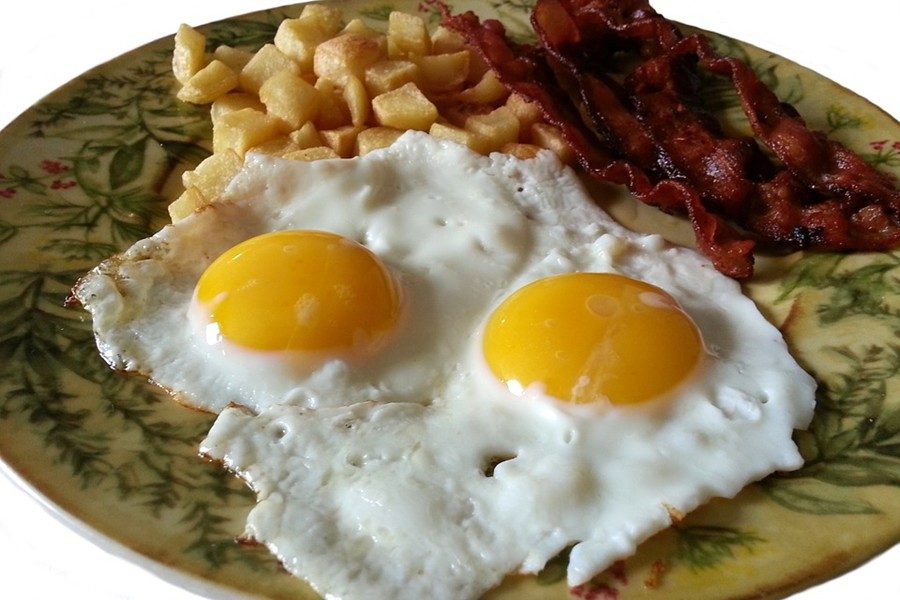 The classic bacon and eggs makes a delicious breakfast.

Tired of always eating the same boring things for breakfast? Want to try something new? Check out our top 10 list and watch our newest Dudes on Food video with Sawyer Kline and Jake Hoover.

Omelet: Eggs can be made in many ways, but the omelet has stood the test of time as one of the most favorite breakfast food.
Biscuits and gravy: You can’t resist fresh Pillsbury dough buttermilk biscuits smothered in hot steamy gravy.
Hash browns: You can’t have a breakfast without hash browns. Dashed with salt and pepper it makes the best side to any morning meal.
Bacon: Not that putrid turkey bacon. The best feeling in the world is waking up to the scent of freshly cooked bacon.
Toast: You can’t imagine a breakfast without toast. Toast has always been the best breakfast side and forever will be.
Mess: It describes itself. Packed with eggs, peppers, onions, hash browns, ham, and covered in cheese, it is a sensations of flavor.
Crepes: The pancake’s skinny cousin from France. They are at their best when covered with fruit and whipped cream.
French toast: This isn’t your average toast … it’s FRENCH toast. It tastes much sweeter than normal toast, even though it might not be as healthy … but who cares?
Pancakes: The cake you make in a pan. You don’t know a single person that will truthfully say they don’t like pancakes.
Belgium waffles: These aren’t your Homestyle Eggo’s. They put other waffles to shame and can only be described as to-die-for.