Students at B-A learn to cope with Type 1 diabetes 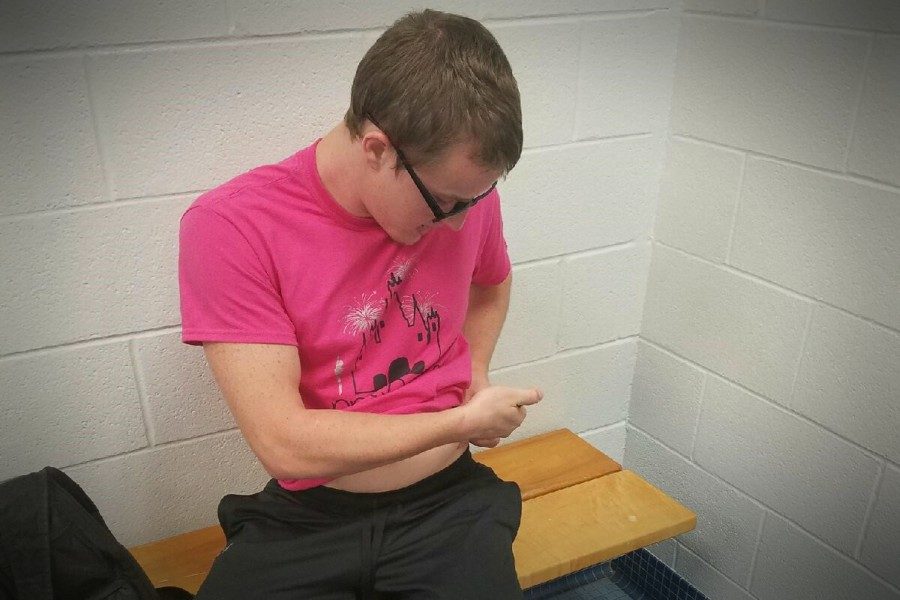 Ryen Beam has to deliver insulin injections to himself daily to help him combat type 1 diabetes.

School can be tough on anyone, but usually that challenge is mental, not physical.

One thing that very few students have to deal with in school is type 1 diabetes.  In fact, there are only about 200,000 people under the age of 20 nationwide with the disease.

According to the American Diabetes Association, type 1 diabetes is usually diagnosed in children and young adults.  Type 1 diabetes does not allow the body to produce insulin, which can lead to high or low blood sugars.

Bellwood-Antis senior Ryen Beam is one of the students that copes with type 1 diabetes.

“My pancreas no longer produces insulin, so this can cause my blood glucose levels to rise or fall out of range, which can be dangerous to my health later in life,” said Ryen.

“Diabetes causes me to lose concentration, be more emotional, and limits my physical ability,” said Zach.

With diabetes affecting their bodies in different ways, it can obviously make school very challenging.

“I sometimes can’t concentrate on tests and can be more aggressive towards others,” said Zach.

This disease can also cause the students to miss valuable class time.

The good news for type 1 diabetics is that they are in good hands.  School nurse Mrs. Kelly Hoover does everything she can to help diabetics at Bellwood-Antis.

School is not the only place where Ryen and Zach to take precautions because of their diabetes.  Both Ryen and Zach are involved in athletics.

“I have to make sure I’m careful with my blood sugar in sports.  If I’m at practice and my sugar feels like it’s dropping I’ll have to go take a break and check my sugar to make sure it’s still in range,” said Ryen, who is a starter on the football team.  “During games, my sugar will sometimes go really high because of the adrenaline in my body.”

“When my blood sugar is high I am more likely to be extra aggressive and can’t play to my full potential,” said Zach, a major contributor on the undefeated junior high football team. “When I am low I can’t play without risking passing out.”

Football coach and physical education teacher Mr. Nick Lovrich is thankful that the diabetics he has coached and taught have been responsible about dealing with their diabetes.

“I haven’t had a lot, but the ones that I’ve had have been really responsible about it and I haven’t had to worry,” he said.  “They’ve always taken care of what they are supposed to do, like going to the nurse before gym class to make sure they are all right.”

Mr. Lovrich also added there are signs that he is trained to look for when it comes to diabetics, which include looking for signs of fatigue and a student not acting like him or herself.

Even with the challenges they face on a daily basis, both Ryen and Zach are very successful. In fact, Ryen recently got the lead role in the upcoming school musical “Footloose.”

“It’s not an easy thing to manage, but it doesn’t stop me from doing what I love to do,” said Ryen.