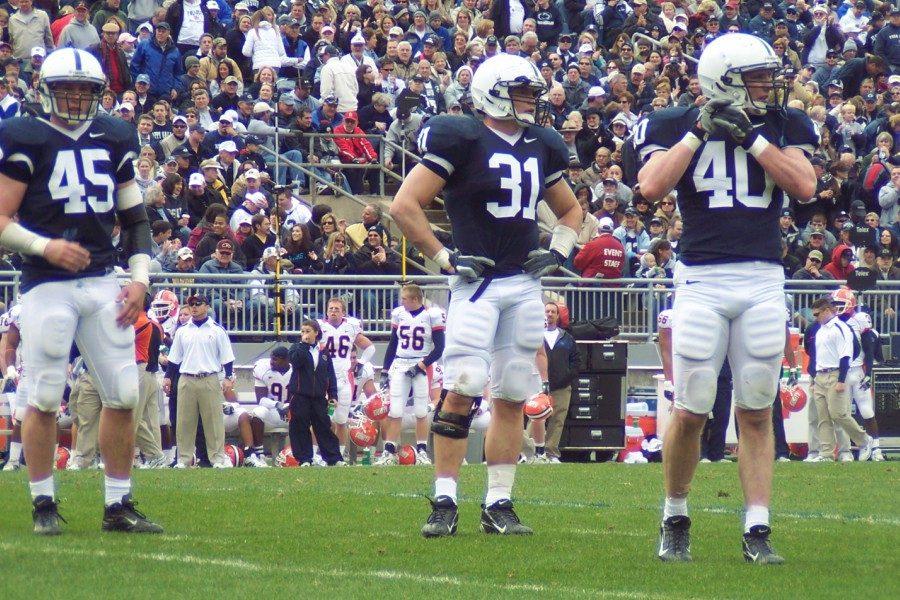 The most dramatic change in Penn State's classic uniforms came in 2011 when they decided to switch from white collars to navy blue collars.

In college football, the Number 1 priority is definitely to win.  But, if you’re going to win, why not win in style?  And if you aren’t any good, losing in style is still better than just plain losing!

UCLA: The classic blue and gold look of UCLA’s uniforms is nice, but in 2014 they debuted an all-black LA-midnight jersey, a twist on their normal jersey that looks good during the day, but amazing during the night!

Oregon State: Orange, black, and white striped jerseys and helmets with the electric beaver logo on the helmet is one you’ll either love or hate; there’s no in between.

TCU: Purple may be considered a “girly” color, but when it’s incorporated with the white, black, or the camo purple of TCU’s jerseys it definitely makes the top 15 list.

Houston: Red Chrome, white chrome, and even black chrome helmets with the classic jerseys makes for an interesting looking combo.

Clemson: There’s a difference between a good orange and a bad orange, but for Clemson it’s a very good orange; plus the mix of an occasional purple puts Clemson in the top 15, but just outside of the top 10.

Penn State: Yes, somehow Penn State made the list, but simply because they have never changed: classic navy blue and white with the no last name on the back is just too cool to not make it.

Arizona State: Making the change from Nike to Adidas revamped the look of the Sun Devils’ uniforms, but the new-look unis matches Arizona’s climate: on fire!

Washington: More Purple!  The gold might be the best color to go with the purple, but the occasional all black or white makes for great uniform combos.

Texas A&M: Great football tradition, but when Kevin Sumlin started coaching the Aggies he brought some new uniforms.  Mostly it’s the alternate’s like the icy all white and silver or all maroon, but what puts them over many schools is the throwback stripes on the sleeves for  a classic jersey.

Florida State: The Seminoles go from boring old red and gold jerseys to a new-look maroon color and the classic tomahawk on the side of the helmet. Plus, the tribal patterns on the sleeves and neckline provide a look that’s futuristic, but also classic.

Notre Dame: Classic.  Navy and gold always seems to look great on football uniforms, but the new “shake-up” of the Shamrock series uniforms from Under Armour features the throwback green and takes Notre Dame to a whole new level.

Navy: Navy and gold with the stripes across the front of the jersey and on the sleeves with plain gold helmets and pants puts Navy in the top 10. However, the amazing display of helmets and jerseys adding yellow and blue and grey with different ships on each player’ helmet depending on what branch of the Navy they are in propels the Mid-Shipmen to a top five spot.

Maryland: When the owner or Under Armour is a former special teams captain at your school, you get a LOT of uniforms.  The state flag driven uniforms are extremely cool with a lot of flash, and the red, yellow, black and white from the Maryland state flag seem to be a perfect color combo.

Oregon: Any Oregon jersey is cool, from the uniforms that make them look like ducks, or the carbon fiber and black, to the green, yellow, black, or white, Oregon always has the flashiest, coolest looking jerseys on the field.  Oregon has never worn the same combination of jerseys, pants, and helmets.  Nike co-founder Phil Knight helps design new uniforms every year, so no doubt they get the two-spot.

Michigan: The Maize and Blue was already a great look, but Michael Jordan got together with Wolverines Coach Jim Harbaugh to collaborate on the first Jordan-inspired football Uniforms, and they look amazing. Not as flashy as others, but definitely worthy of the top spot.