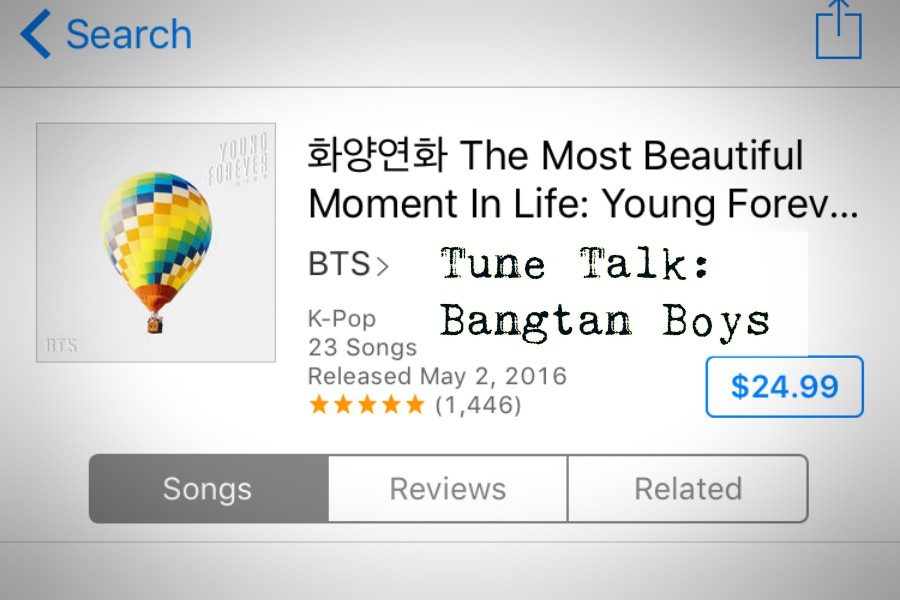 Bangtan Boys, better known as BTS, are a Korean pop group that have recently blown up in the United States. Since BTS’s sound is very similar to the rap and pop songs that you hear on the radio everyday, their music has become a huge success in America. The group debuted in 2013 with their first song “No More Dream” from their first album, 2 Cool 4 School. BTS is managed by Big Hit Entertainment and they are from Seoul, South Korea.The band consists of seven members: Rap monster, leader and main rapper; Jimin, singer and dancer; Jungkook, singer and dancer; J-hope, lead dancer and rapper; Suga, rapper; and V, singer.

The boys won many awards following their debut including “Best New Artist of The Year”. Since their debut they have released nine more albums, the most successful being Skool Luv Affair, Dark and Wild, and The Most Beautiful Moment in Life Pt. 2. Bangtan’s newest album, Wings, was released October 10th of this year. Wings includes one of their most popular songs, “Blood, Sweat, and Tears”, followed by a solo song from each member. Some of their more well-known songs are “Fire”, “Dope”, “I NEED U”, and “War of Hormone”.

Overall, the Bangtan Boys are pretty amazing and I think everyone should check them out. They may just be rookies, but their fan base has grown so much in such a little amount of time. If you want to start to get into them I suggest you listen to “Dope”, “Blood, Sweat, and Tears”, and “Fun Boys”. You won’t be disappointed.