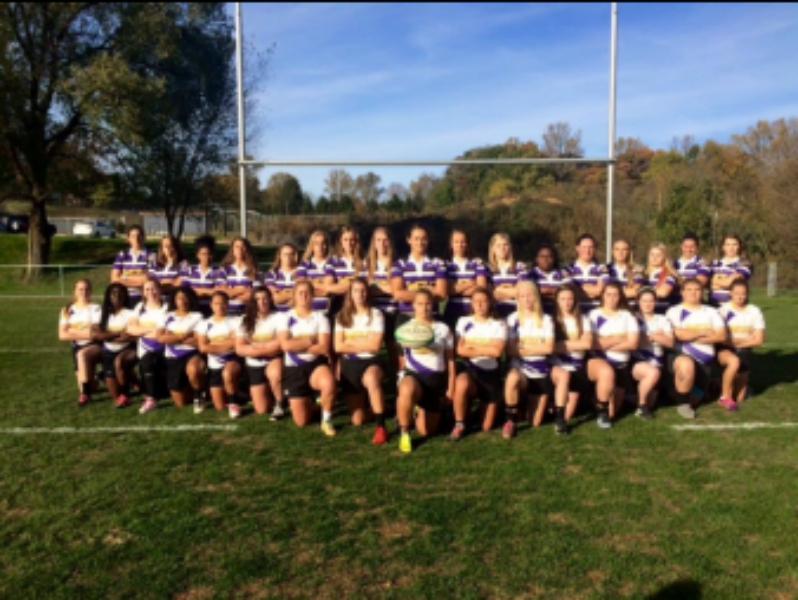 Alayna Roberts, third on the right from the ball, is now a member of the West Chester rugby team.

After graduation, it may be difficult to find who you are going to be at college. You can change your attitude, your look, or maybe join a club or activity. For two Bellwood-Antis alumni, the answer was to try a new sport.

This year Alayna Roberts and Christina Kowalski began participating in sports not traditionally available in high school that they found love for in college.

“I started playing because two of my friends in ROTC play and they told me I should try it and it seemed like something I could get the hang of,” said Roberts, “I loved sports in high school so I wanted to be on a team again and practice and stay in shape.”

Christina, however, went a different route. At her college of choice, Robert Morris University, she joined the women’s rowing team.

“You don’t have a position in rowing, you have a seat and it changes all the time based on what the coach thinks will make the boat go faster.If you start at the bow of the boat you have bow seat (1) the whole way up to eight which is called the stroke seat,” she said.

Sports pose a much more extreme obstacle on students at the collegiate level, especially when it comes to time management.

“It’s hard to balance sleep and social life and injuries and school and everything, but athletes get priority scheduling. They offer a lot of services for us like study halls to maintain certain GPA’s,” said Roberts.

“Most days I wake up at 4:45 a.m. to catch the 5:10 bus to practice. The team gets back from practice around 8:30, and after that everyone is doing their own thing, whether it be napping, studying, or class,” said Kowalski.

Much like high school sports, the physical toll on an athlete doesn’t let up once you get to college.

“Rowing has pushed me to my absolute limit, but it has made me a better person. I’ve had some of my best and worst experiences at practice, but I wouldn’t trade it for the world,” said Kowalski.

“After my first game I felt like I got hit by a bus, but you get used to it. We have a specific group of athletic trainers that come to every practice and every game so they take really good care of us.”

The two, who once played on the same soccer team in high school,  take the changes in stride and enjoy the elements of their sports.

“We played some big teams. We played Penn State, and that was definitely like a ‘this isn’t high school anymore’ kind of moment,” said Roberts. “They’re the best in the country, so that’s cool and intimidating. We travel a lot further, like up to Connecticut and Massachusetts for some away games, it’s just all around more intense.”

For Kowalski, her teammates have become much more than just some girls to go out on the water with.

“The team has basically become my family, and I’m so lucky to have them,” said Christina.