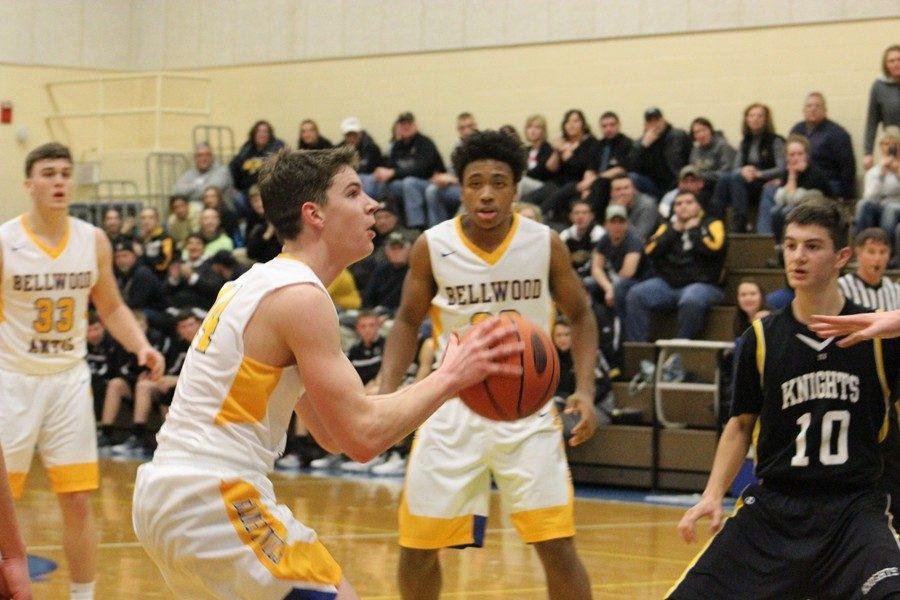 Joe Padula pulls up for a jumper in Wednesday's game against Moshannon Valley.

B-A was on top in the first two quarters, and by the end of the first half the Devils led by 12 points.

Everything seemed to go wrong for Bellwood-Antis in the fourth when they fell to a 45-40 deficit.

Moshannon Valley was aggressive towards the end, hitting 13 foul shots in the fourth quarter.

Bellwood came back to tie the game 48-48 late, but  a Curtis Neff layup followed by another B-A turnover leading to a score for the Knights sealed the deal.

“We couldn’t get a bucket in the second half,” said Ethan McGee

Padula, Ethan McGee, Jarrett Taneyhill, and Trent Walker all finished with nine or more points, but Padula led with 12.
Lady Devils get back on track
The Bellwood-Antis Lady Devils bounced back after two straight losses to defeat Juniata Valley of a score of 84-72 Wednesday night in the consolation game of the Jaffa Shrine Tournament in Altoona.

The Lady Devils started off slowly, falling behind early and ending the first quarter down 25-18.  Juniata Valley got into foul trouble early in the game when a couple of their starters picked up three fouls midway through the second quarter, which forced the Lady Hornets into a zone. That allowed B-A senior point guard Karson Swogger to score 25 of her game high 42 points in the second and third quarters.

Swogger’s  42 points tied her own school record for points in a game. Freshman Alli Campbell added 17, along with another 11 by freshman Emilie Leidig.