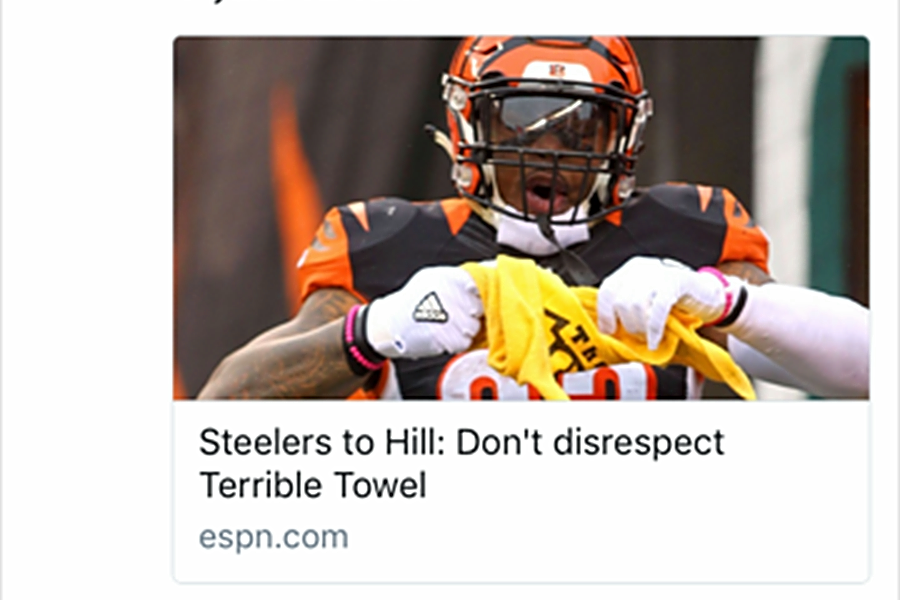 The Bengals made another mistake against the Steelers when they dissed the Terrible Towel.

Rivalry games are some of the most entertaining events that go on in the sports world. From high school to college and into the professional leagues, rivalry games are anticipated by many.

Football games can sometimes bring out the best in people, especially when it’s a heated rivalry game. The 814 area is heavily populated with Steeler fans, considering the football powerhouse is only two hours down the road.

Steeler nation is well aware of the love/hate relationship shared with the Cincinnati Bengals. Sometimes it tough to decide whether the Bengals are a professional sports team, or the biggest Cincinnati street gang posing as an NFL team (after all, this is the city that killed Harambe).

Every season in the Steelers-Bengals match-up, some sort of implosion occurs, often leading to several personal foul penalties, dirty hits, or poor sportsmanship. The Bengals can’t ever find a way to win to begin with.

Every Steeler fan remembers last year’s game when Vontez Burffict laid a dirty hit on Pittsburgh’s Antonio Brown. If Steeler fans didn’t despise Burffict and his group of thugs after that play, then then they more than likely did after this past Sunday’s game.

Dirty plays and late hits were expected in this week’s matchup. The tone was set when Cincinnati’s Jeremy Hill scored a touchdown and took a Pittsburgh authentic Terrible Towel out of the stands. He proceeded to rip it and twist it, showing hatred towards the visiting Steelers.

You could say this is when the tides turned in the Steelers 24-20 victory, making the Bengals look bad as usual. A slew of penalties once again shot the Bad Boy Bengals in the foot when it was crunch time to get a win.

Dre Kirkpatrick, a defensive back for Cincinnati, was caught after the game giving his thoughts. He proceeded to slam the referees, saying how they played a big factor in the big game, obviously not in the Bengal’s favor.

For anyone that watched the game, you could identify Kirkpatrick as number 27, the only cornerback who played more of a horse-back rider on Antonio Brown than a DB.

At the end of the day, no matter how many shenanigans the Bengals try to pull, it seems they won’t be able to get what matters, a win against the Pittsburgh Steelers.