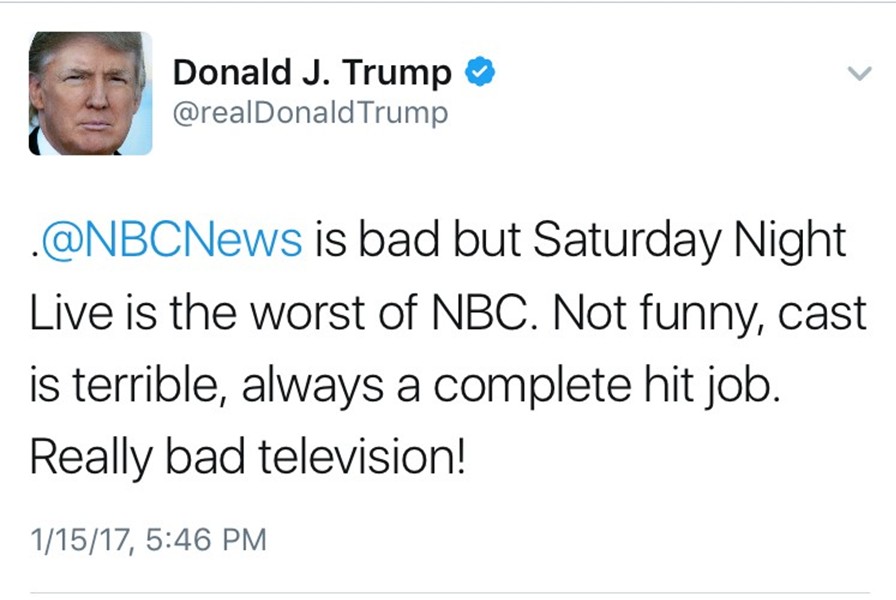 No one is immune from a Donald Trump rant in a tweet, not even SNL.

If you follow our 45th President of the United States on Twitter you can clearly see that he does not like Saturday Night Live. President Trump has tweeted out many times about SNL, complaining it’s the worst of NBC, and not funny.

Actually, it seems like many late night shows like to make fun or poke our President. But Trump isn’t the only President that was featured on the show. Many Presidents have been on the other end of the stick with the show, like Bill Clinton, George W. Bush, and Ronald Reagan just to name a few.

But it’s clear to say that no other President has responded the way Trump has. Trump has tweeted out at the show saying, “Time to retire the boring and unfunny show. Alec Baldwin portrayal stinks. Media rigging election!”

But just what makes Trump immune to the jokes of Saturday Night Live, or any other TV shows like South Park?

If SNL doesn’t take Donald’s tweets seriously they could end up in the same boat as the Environmental Protection Agency, which has recently been issued a media  blackout and received an order to “freeze” any new regulations coming out of the federal agencies. Before you know it Saturday Night Live wouldn’t be in the TV Guide.  Clear message: Don’t mess with the Donald.

What’s ironic is Trump has even appeared on the show dancing to a Parody of Drake’s Hotline Bling. In his view, when he was on the show, the show was actually funny, any other time, not funny.