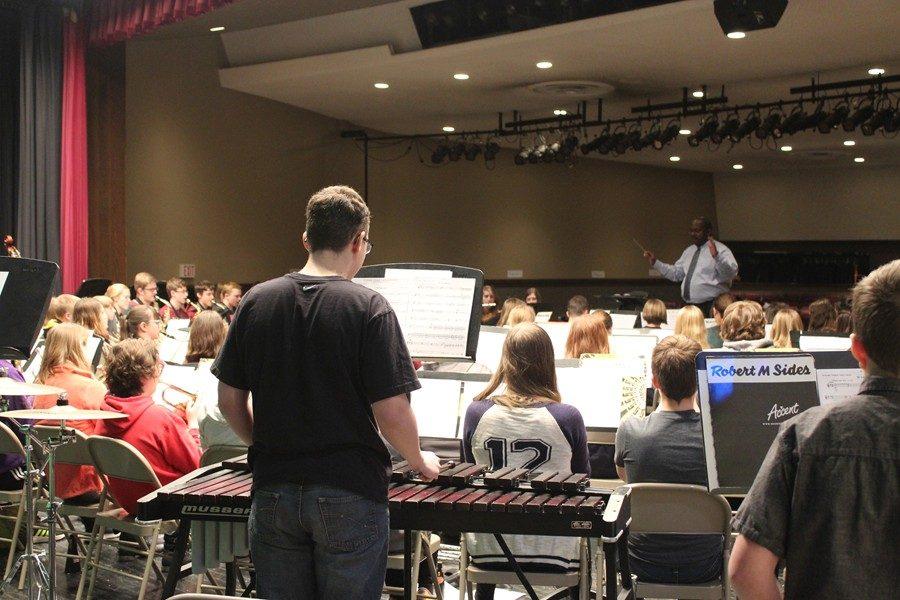 Conductor Dr. Darrin Thornton wanted to be at B-A for County Band, but realized it was the right move to cancel in light of the weather situation.

In an instant, a year’s worth of planning was cut short yesterday when the 2017 Junior High County Band Festival set to take place at Bellwood-Antis was cancelled due to weather.

Snow began falling early Tuesday morning, school at B-A was delayed two hours, and by the time the day began at 10 a.m. the decision had been made to cancel the performance.

Musicians from 10 area schools were at B-A on Monday preparing for the event.

The decision was difficult to make, but it was made carefully by Band Director Mr. Pat Sachse, BASD Superintendent Dr. Thomas McInroy, and the band directors from other 10 schools at the event.

Mr. Sachse aid that safety was the number one reason for cancellation.

“The driving conditions were not safe enough for a long commute,” said Mr. Sachse. “The decision was made in the best interest of the parents and students.”

Since multiple months of hard work were put into this festival by both students practicing and band directors preparing with one another, many wondered why the festival wasn’t postponed to a later date. However, Mr. Sachse said that because there are so many festivals this time of the year,  finding a reasonable date to postpone county band to was impossible.

Dr. Darrin Thornton, an assistant professor of music at Penn State’s School of Music, was invited to conduct the concert and agreed it was the best decision.

“The students in the Blair County Junior High Schools put in a lot of personal work preparing to attend the county band event, and also put in a hard day of collective work on Monday,” said Dr. Thornton. “Although it is disappointing the weather did not cooperate and the event had to be canceled, it was the best decision given the number of students and districts involved. ”

Along with his hand in the Blue Band, Dr. Thornton teaches music education foundations, methods and technique courses to undergrads, while also serving on the masters and doctoral thesis committees.

“I thoroughly enjoyed the day I was able to spend with this fine group of young musicians. I hope to return the area again soon,” said Dr. Thornton.

Not only were months of hard work put in to this festival, a lot of money was spent on drinks, snacks and other supplies as well. To prevent throwing the goods and supplies away and wasting money, items will be saved and used at future events.

“The chorus is hosting Junior High County Chorus in March,” said Mr. Sachse. “Anything non-perishable will be donated to their festival to make their lives easier.”

Mr. Sachse said that although he is disappointed, he is glad that the decision was been made to keep the students safe.