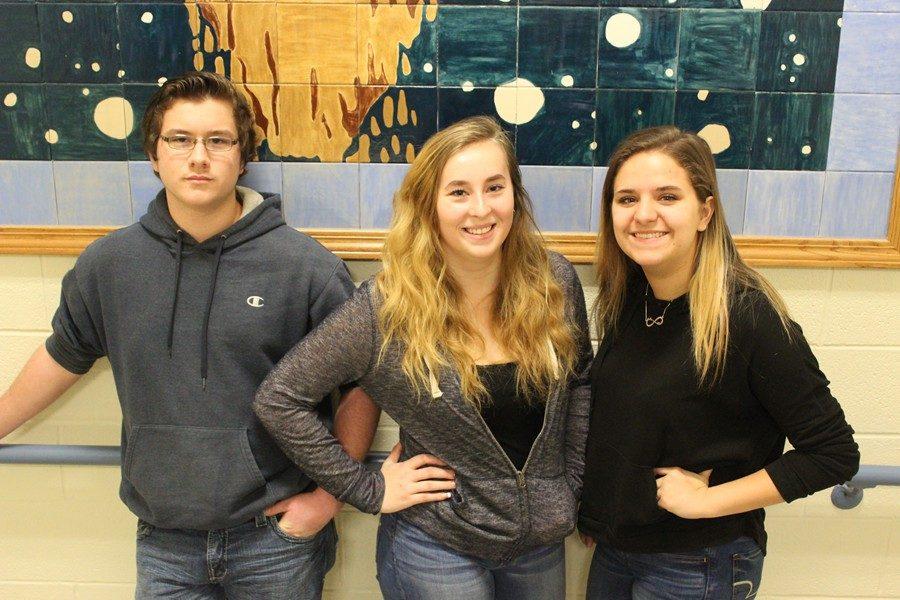 (L to r): Aaron Miller, Adoria Kline, and Alexis Kensinger all advanced to the state SkillsUSA competition. Missing form the photo are B-A's other two representatives at states, Brett Tipton and Duke Brunner.

Five Bellwood-Antis students recently qualified for the state SkillsUSA competition in the following categories for the Greater Altoona Career and Technology Center:

The students won their medals at the District 7 SkillsUSA competition.

SkillsUSA is an organization that improves the quality of America’s skilled workforce through a structured program of citizenship, leadership, employability, technical and professional skill training.

The Mission Statement for SkillsUSA is to empower its members to become world-class workers, leaders, and responsible American citizens. It serves over 300,000 students and instructors annually.

When these students were asked to reflect on how it felt to earn a trip to states for CTC, they all said they were very excited to go.

“It feels really cool because I have competed in something I am enthusiastic about it, and getting to move on to states will be a great opportunity to improve my skills,” said Adoria.

“This award means a lot to me because I am proving to people what I can do and my commitment to this profession that I am going into.”

Senior Alexis Kensigner was also excited about her award.

“It is an awesome opportunity to be able to participate. Many people would love to go to states but didn’t make the cut, and I did. So that’s pretty cool,” said Alexis.

Alexis also explained why she wants to enter the Health field.

“I entered the health field is something that changes every day. I just find it very interesting how people can make someone sick, better. It is such an amazing thing” said Alexis.

Aaron said he was happy to represent his class.

“It is nice because I feel I am representing my class and sharing what I am taking out of the class,” he said.

“I think it is great to represent the area in a state competition because it is something not everyone gets to do,” Duke said.  “Whether it is sports or education, you get to compete to be number one in the state and if that happens I am sure that will be something special.

“Beating my opponents in Districts meant a lot because it gave me confidence in my training.”

Duke decided to work in the Emergency Services because someday he would like to be a state police officer and wanted to get an idea of what it would be like.

“I competed in Crime Scene Investigation because it was something new I wanted to learn, and I have come to find out that I am actually good in this field due to these competitions,” said Brunner.

Brett said he enjoyed the competition because it allowed him to build his resume.

“Employers like to see you’re involved. They see it as responsibility” said Brett. “It will be a lot harder in states.”