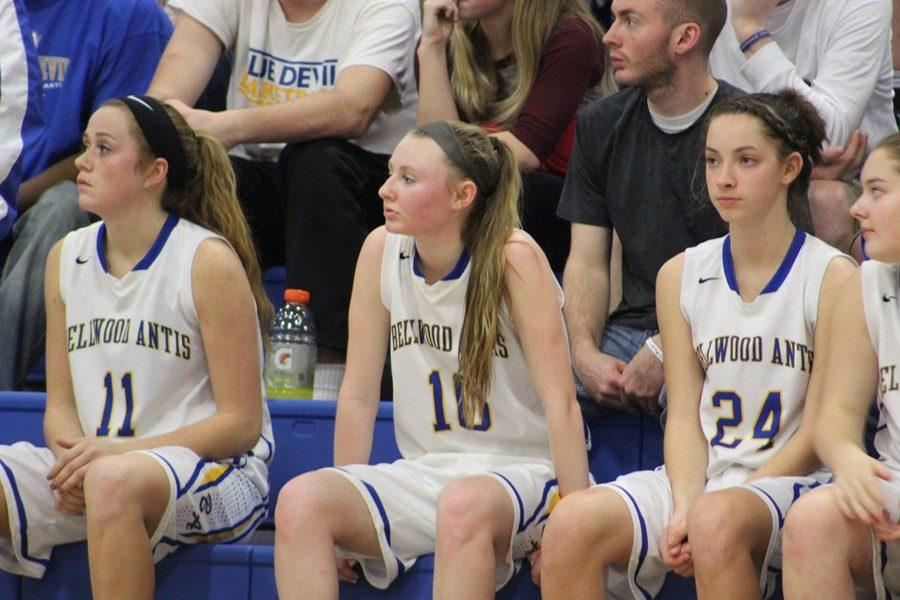 Riley D'Angelo and Sophie Damiano look on from the bench after fouling out in the Lady Blue Devils' loss to Everett Saturday in the ICC championship.

Saturday night didn’t go as planned at Claysburg-Kimmel High School when the Lady Blue Devil basketball team lost in the ICC Championship to the Lady Warriors of Everett in a 62-58 thriller.

Karson Swogger and Alli Campbell led the way for the squad throughout the entire game. Swogger dished out 25 points and Campbell added 18 points, accounting for most of the team’s scoring.

The first quarter was too close to call as each team came out firing on offense, putting up close to 20 points each. But a patient Everett offense was able to outscore the Devils by six points.

“We played too much around the perimeter and needed to start getting to the hoop more,” said senior Sophie Damiano.

Coming out of the half the Lady Devils were able to get some rhythm going, outscoring Everett 17-6 for third quarter. A late basket by Swogger and a three from Riley D’Angelo pulled B-A within two, down 40-38 heading into the fourth.

In the final minutes Bellwood continued to struggle from the field, and shot 34% for the game.

“We didn’t play well in the first half, and they took advantage of us not playing very good defense,” said Campbell.

The Lady Blue Devils look to get back on track tomorrow night in the first round of the District 6 2-A playoffs, hosting the Lady Comets of Penns Manor.