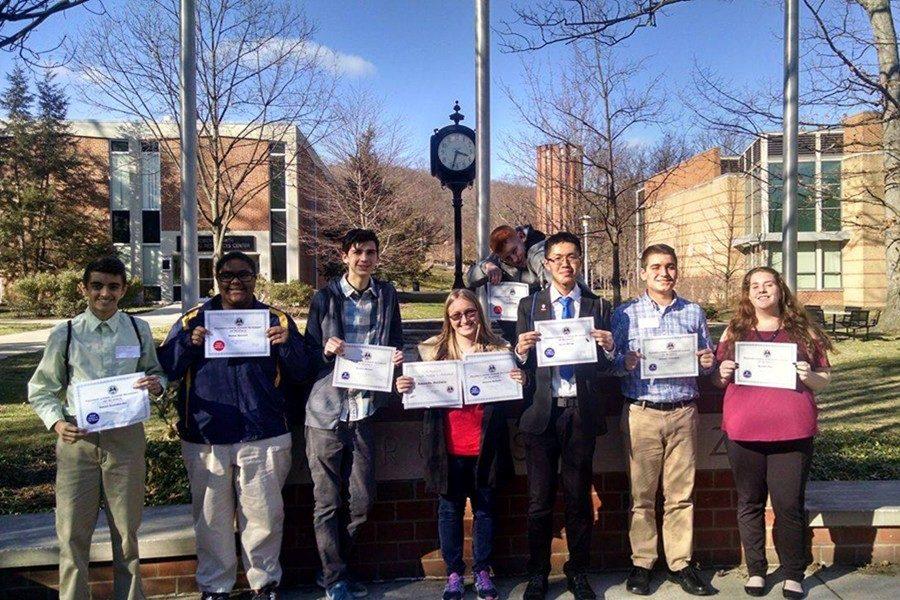 Last Saturday, March 4, 10 students from Bellwood-Antis competed at Penn State Altoona for Pennsylvania Junior Academy of Science (PJAS) at the Region 6 competition. Out of the 10 students who went to the regional competition, eight received first awards.

“I’m very proud of the students and their efforts,” said biology teacher and PJAS advisor Ms. Denise Shimel. “I’m happy so many participated, worked hard and were acknowledged for their academic pursuits. In many cases, I had little to do with their work, so the students are the ones that need to be commended!”

According to its website, PJAS “is a statewide organization of junior and senior high school students designed to stimulate and promote interest in science among its members through the development of research projects and investigations.” Students have to present a less-than-10 minute oral presentation on their research project with a poster in front of 1-3 judges, and 3D objects are not permitted for the presentation.

The number of Bellwood-Antis students competing at regionals doubled since last year. Last year, there were only five students at regionals and only three qualified for states.

Amanda Baldwin, a senior at Bellwood-Antis, competed for the third year in a row this year. She won a Senior Three Year perseverance award. She also had a perfect score on her project and earned a Special Judges Award of a $50 gift card.

“My project was to determine if it was possible to charge a battery based off of heat,” said Amanda. “It felt amazing after three years of striving for first place to be able to not only obtain a first place, but to obtain a perfect score.”

Most of the students who competed at the PJAS regional competition for Bellwood-Antis received a first award, and can advance to compete at states, which will be held at Penn State University Park. The students who received a first award were sophomores Dominic Tornatore, Brandie Ray, and Daniel Kustaborder as first time competitors, and Quintin Nelson as a second-year competitor; juniors Christina Hollen, as a first-year competitor, and Hannah Hornberger in her second year competing; and seniors Devon Zheng, competing for the second time, and Amanda Baldwin, competing for her third year.

Devon is excited for states but understands the effort he needs to put forth.

“Due to the level of difficulty, I may change my approach to make my mark at states and do better at states than at the regional competition,” said Devon

Dominic Tornatore is also eager for states and is proud of his performance at the regional competition.

“It feels great to get first because I worked really hard on both my presentation and my experiment. It took five months to complete my project,” said Dominic. “I think I will do pretty good at states since I have room to improve on my presentation.”