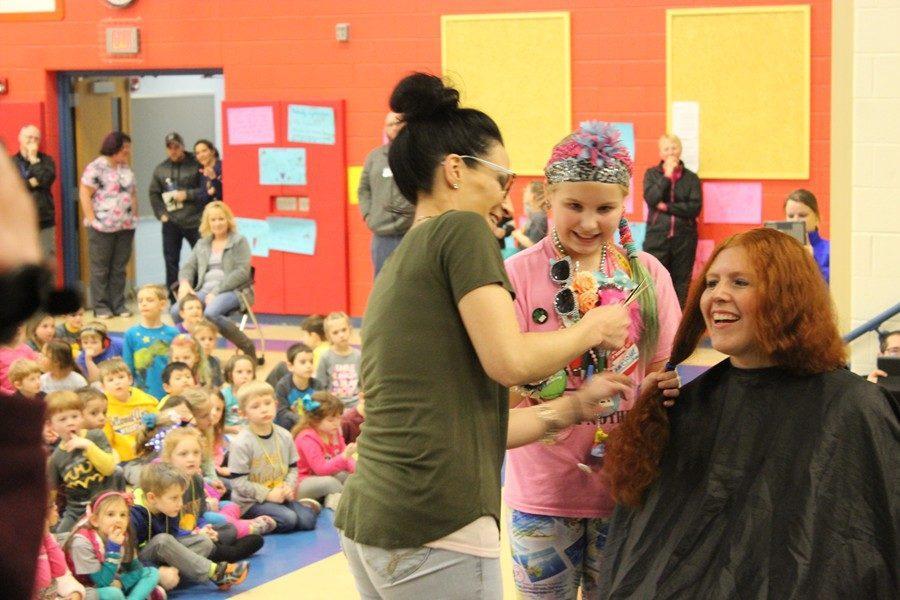 Myers teacher Tommie Murray had 12 inches of hair cut off for childhood cancer patients at a recent assembly.

Ms. Murray often uses basic instruction to get this message across to her students, but two weeks ago she made one demonstration that would truly stick with not only her students, but staff and faculty who were around to see.

In honor of  International Childhood Cancer Awareness Week, Ms. Murray allowed two of her fourth graders  to cut her hair to be donated to Wigs for Kids, an organization that takes donations in the form of ponytails to make custom wigs for children who have lost their hair as a result of chemotherapy and other cancer treatments.

“We got an email on a Monday that that Wednesday was International Childhood Cancer Awareness Day, and that as an elementary school we were going to have an assembly to honor and celebrate and support our students in our district who are battling cancer,” said Ms. Murray, “They had suggested that whatever class wore the most cancer colors that day would get to do something to their teacher, things like pie in the face, silly string, things that kids would be motivated to do.”

Ms. Murray wanted to do something with her class that would get an important message across about how a simple act of kindness can make such a big impact.

That was when Ms. Murray reflected on Myers second grader Maddie Shura and BAHS senior Alexis Kensinger, two students in the district battling forms of cancer.

“I thought about what we could to do show students that they could make a difference in cancer. Maybe they don’t know the cure for cancer but they can certainly help those with cancer, and so by cutting my hair it was a symbol to them that a small act of kindness can really make a big difference.”

Ms. Murray’s goal was to relate the big scheme of childhood cancer and help her students to understand they too can help.

“Although you may not be able to solve this big problem of cancer you can make an impact and you can make a difference with just simple everyday decisions. Cutting your hair, buying a bracelet, or wearing the colors that coordinate with particular cancers those show support to people who are fighting for their lives and I think that support and encouragement go a long way.”

Principal Terri Harpster was not at all taken back by Tommie’s proposition.

“When Tommie told me, I was so proud of her, but not at all surprised. Tommie is a thoughtful and generous woman,” said Mrs. Harpster, “Her offer to let a student cut her hair, and the fact that it happened may be something remembered by her students throughout their lives. As Tommie told me about her offer, I remember her saying, ‘It is just hair. It grows back.’”

On February 15th, Ms. Murray was the highlight of the cancer awareness assembly when she had 12 inches cut off her hair in front of 400 screaming and cheering students. Alexis was there to do two cuts, herself.

Though this isn’t her first time donating her hair, Ms. Murray did have some doubts as the snippers got closer.

“I was thinking ‘I really hope they don’t go too short!’ I brought a beautician in to measure things out and the students would have an opportunity to cut my hair.”

Alexis Kensinger, a Bellwood senior who recently learned she was cancer-free after receiving treatment for thyroid cancer, enjoyed her opportunity to cut Ms. Murray’s hair.

“It was crazy! She had so much hair!” said Alexis. “It was really cool because I did half of it. Hearing all the little kids scream when I did it and held it up, they went crazy.”

Ms. Murray was happy to be able to show her fourth graders just how simple kindness can be.

“It felt great. It felt like for my fourth graders this year they got to see what one small decision can do for people. That’s what I love about being a teacher; you get to influence your students to become the best versions of themselves and show them what love, kindness, and bravery can do. I felt that I was doing that, I was able to show them, not just tell them, about being kind and loving yourself.”