Giovanna Caracciolo takes local and regional titles for her poster 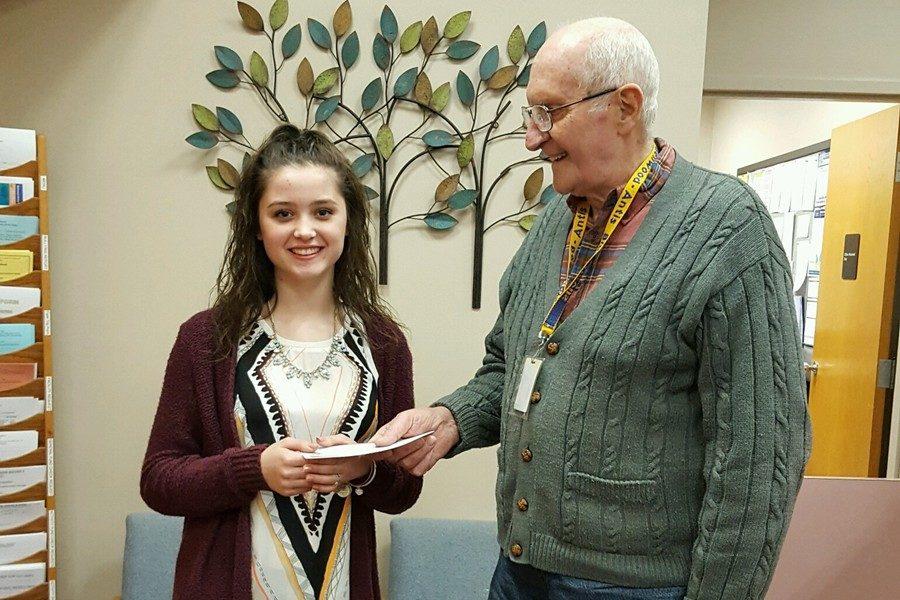 Giovanna said, “It feels great to be rewarded for an accomplishment I worked so hard for.”

The Lions Club annual Peace Contest is a contest where schools and local groups can enter art based off of a topic established by the Lion’s Club.

This art contest encourages young people worldwide to express their visions of peace.

Each poster is judged on originality, artistic merit and expression of the theme.

Giovanna’s poster featured a girl raising up her arms to a sky full of sunflowers.  The sunflowers can represent the faces of mankind following the sun (or God) throughout the day receiving life and light ending their day following it behind the horizon as if bowing their heads in prayer.  The girl with her arms reached high rejoices and celebrates the sight of mankind seeking and following a light that will lead the world out of darkness.

At the international level, judges from the art, peace, youth, education and media communities select one grand prize winner and 23 merit winners.

Giovanna said, “It feels great to be rewarded for an accomplishment I worked so hard for.”

Giovanna entered into the contest “because both Mrs. McNaul and I felt that my piece was a very good contender for the contest and showed the true meaning of the theme.”

“Giovanna’s piece connected the best to the theme ‘Acceleration of Peace,’ as well as having a nice composition, drawing and coloring,” said Mrs. McNaul.

Giovanna said she really enjoyed working on this project with the friends in her class and Mrs. McNaul, especially.

The Lion’s club is an association that empowers volunteers to serve their communities, meet humanitarian needs, encourage peace and promote international understanding through Lions clubs.

The club has 46,000 clubs and 1.4+ million members making them the world’s largest service club organization.