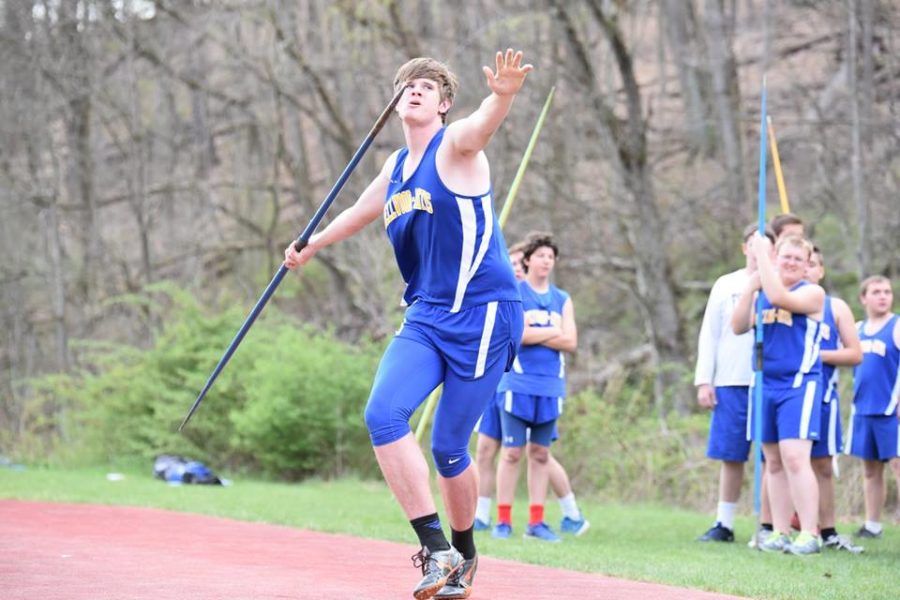 Jarrett Taneyhill has a strong chance of winning medal at Districts and advancing to states in the javelin.

The Bellwood-Antis track and field team is looking to have another great season after only losing two meets last year going 12-3 (a tie with Hollidaysburg went officially to the Golden Tigers on a tie-breaker).

There are many more great players returning which gives Coach Lovrich, Burch, Edmiston, and Gerwert a lot to build on.

But also some great athletes aren’t there this year such as Nathan Davis and Jake Burch. They were two of the best Bellwood boys track runners you would ever see and they had great junior seasons, but with injuries they were slowed down. Still, the Devils will miss their consistent scoring.

But the Devils should be big in the jumps and relays with McGee, Worthing, Nate Friedenberger, and Shawn Wolfe making up the 4×100 relay team. Glunt and Engle are the big jumpers with both doing long, triple, and high jump.

Last season the Devils had nine place winners at the District 6 championships, including Glunt, who was second place in the high jump, and Jarrett Taneyhill,who placed fourth in the javelin. He is one of the favorites to win the ICC and Districts.

Bellwood has high hopes for some of the returning players this upcoming year and their work ethic is very good. But the new players coming in need to know where they are good and fill some spots on the team that are empty so they have a better chance of winning. Overall, Bellwood is looking to improve their players as a team and individually. They want to do great in their conference and show up big at the bigger meets at the end of the year, like the West Central Coaches Meet and the District 6 championships.

Head Coach Nick Loverich has had a great career coaching boys track and field with a record of 208-19-2 going into his 18th season.