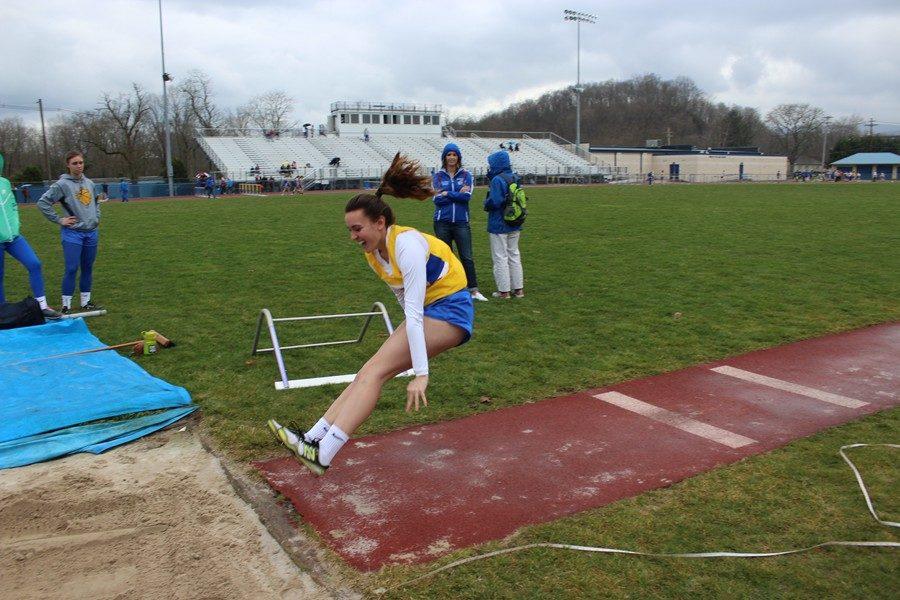 Alanna Leidig competes in the long jump for the B-A girls in their loss to Bedford.

The Bellwood-Antis boys track and field team won its first meet of the season yesterday over Bedford at Memorial Stadium.

Jarrett Taneyhill won in the 110 hurdles and the javelin throw. Ethan McGee won the 100-meter dash and 300 hurdles. Robert VanKirk took home the win for Bellwood in the 1600 and the 3200 runs.

“We performed great as a team and got big points when we needed to; everybody stepped up,” said McGee.

Worthing came in fist in the 400 meter dash, Engle came in first with an impressive triple jump of 40 feet and 5 and half inches, and Glunt came in first place in the high jump, jumping 5 feet and 8 inches.

The team will be at Hollidaysburg on Thursday.

The Girls track team fell in a 107-43 loss, but many of the girls coming to the team from the basketball team, which recently finished a deep run in the state playoffs, performed in limited capacities.

There were only two first place finishers for the lady Devils from Karson Swogger in the triple jump and Alexis Gerwet in pole vault.
Swogger also placed second in the long jump.

B-A might not have had many first-place finishes, but picked up many seconds and thirds throughout the meet.