No party for Marte 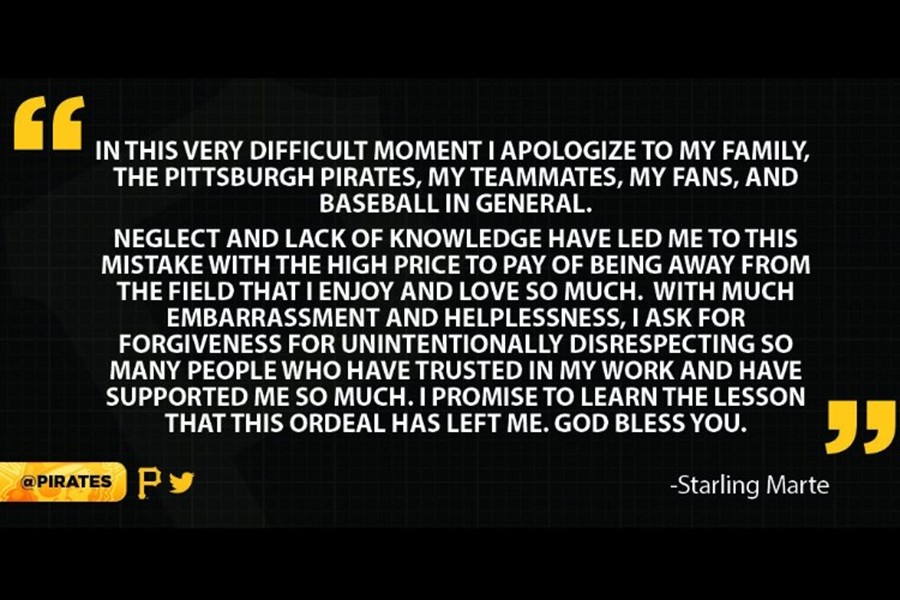 Starling Marte apologized for using PEDs but that doesn't help the Pirates.

The Pittsburgh Pirates announced last week that one of their star players, Starling Marte, tested positive for the player enhancing drug, Nandrolone. Marte will be suspended for 80 games, leaving a big hole in the Pirates’ lineup for a playoff position.

Marte commented on this subject that it was his “neglect and lack of knowledge” that made this mistake.

Marte’s ignorance of what he’s putting in his body is like Dale Earnhardt not knowing what tires are on his car. There are no excuses in today’s game about PEDs. Now-a-days every MLB player knows that steroids are a big no-no and Nandrolone is an anabolic steroid.

Some would say it would be at least reasonable for some no name player that needs a little “boost” in there game, but Marte isn’t one of those players. Marte was already a star! Debuting in 2012 for the Pirates Marte hit a home run at his first at-bat, is a MLB all-star and two time back-back Golden Glove winner in 2015 and 2016.

For someone like him to take roids is like Albert Einstein taking Adderall to take a test.

On the bright side, at least McCutchen’s back in center field like he wanted.

Pirate’s fans are hoping after the long 80 games absence that they will get the Starling Marte they know and love, drug free.