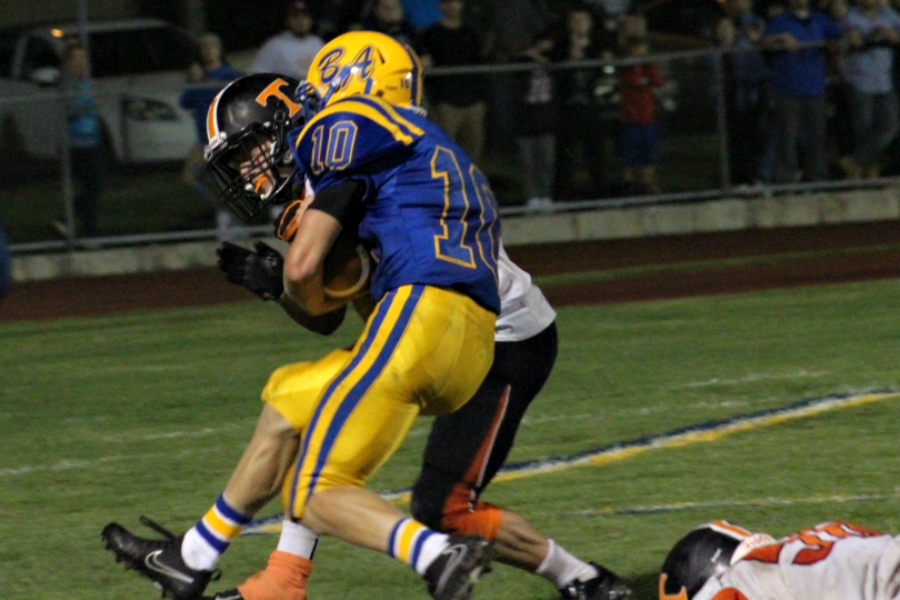 It would be hard to imagine a better way to open the football season than taking down rival Tyrone in the Backyard Brawl, but if there are ways to spice up such an epic win, the Bellwood-Antis Blue Devils found them last Friday in their 13-10 victory over the Golden Eagles at Memorial Stadium.

How can a rivalry win be made any better? Here are four ways:

1. Go extra frames – Tyrone tied the game at 7-7 with a long drive to start the second half that ended with a 1-yard touchdown run by Zac Albright. B-A drove deep into Golden Eagle territory several times after that but couldn’t cash in. In fact, Tyrone halted five B-A drives that went into the red zone, including a stand before the end of regulation that ended when first-year kicker Alex Schmoke missed a long field goal attempt as time expired.

2. Rally for the win – B-A only trailed for a matter of minutes, but it was a come-from-behind win nonetheless. Tyrone’s first series of overtime was capped by a 33-yard field goal from Ethan Vipond to give the Eagles a 10-7 lead, and all they needed to do was get a stop. But on B-A’s first play on their initial overtime drive junior quarterback Shawn Wolfe,  making his first varsity start, broke containment around the left end and ran 10 yards for the game-winning score.

“When their defensive end crashed, I knew I had to get outside,” said Wolfe. “I looked at the comeback and it wasn’t open, so I decided to keep it.”

3. Make big plays on defense – the Blue Devils recovered three Tyrone fumbles and kept quarterback Denver Light on the run. On one series in the first half that invaded B-A territory, junior Jordan Moore smothered light for sacks on consecutive plays to force a punt.

4. Get everyone involved – while Wolfe was the catalyst, passing for 106 yards and running for 91, plenty of B-A players got into the act on offense. Senior Thor Schmittle ran for 87 yards on 16 carries and set up the Devils’ first touchdown with a 47-yard run in the second quarter. Eric Morder capped the drive with a 3-yard touchdown run. Nick Watters had 2 receptions for 40 yards and Ian McFarland had a pair of catches for 22 yards.

So it’s not easy to make a Backyard Brawl win better, because after all what can be better than simply getting a win in Week 1 against your top rival. But if there was a way, B-A found it, and Coach John Hayes knew it was a very important victory.

“When you win this game, it does so much for the whole team attitude,” said Coach Hayes. “The toughest thing we’re going to have to do is get our feet back on the ground and get ready to play next week. That’s a lot easier than trying to raise them from the dead and get them ready for the next week, even though if we would have lost we would have still played a really good game. But when you lose, you lose.”