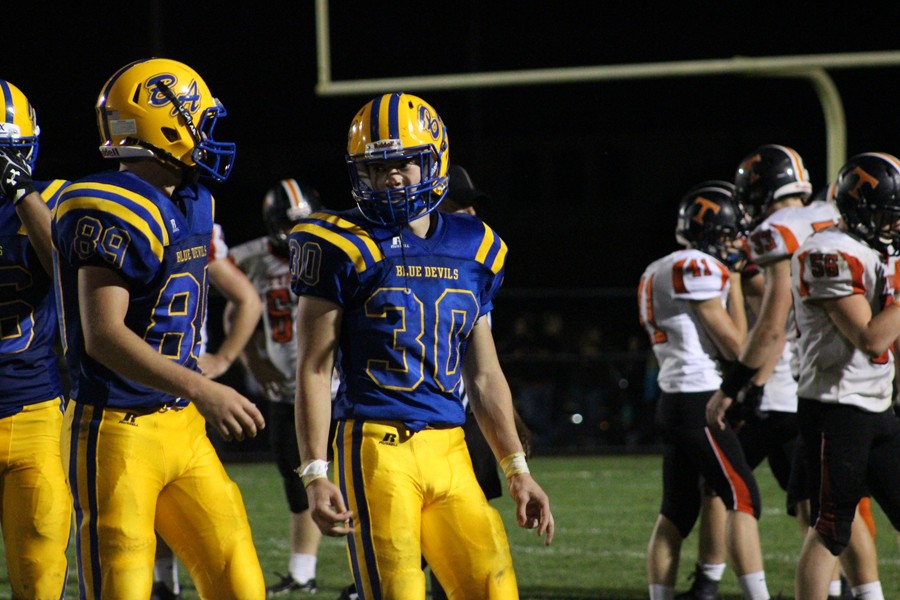 Eric Moreder and the Devils want to keep their focus tonight against Glendale.

Coming off a hard fought rivalry victory that brought the Backyard Brawl trophy back to Bellwood in arguably the biggest game of the season, the question has to be asked: are the Blue Devils still riding off the rush of beating Tyrone? Are they focusing on the upcoming game against the Glendale Vikings?

The Vikings are coming off a strong opening day win against Williamsburg, 35-17.

Four year starting lineman Chris Wertman stressed the importance of staying focused this week during practice to prepare for Friday’s game. He said “Staying focused in practice is very important because if we want to be a good team throughout the season we can’t take weeks off.”

However preparation is key and it will be interesting to see how Bellwood comes out against the Vikings tonight. Will the game plan and preparation going into this week change after a big win?

Assistant coach Schreier had some things to say about how the team will prepare for tonight, noting that the team doesn’t have any major changes in mind.

“Following a big win, it’s our standard to prepare the same against each opponent,” he said.

Coach John Hayes hinted after last weeks win that quarterback Shawn Wolfe will play a bigger role in the offensive attack. Against Tyrone Wolfe threw for 106 yards and rushed for 91 yards, including the game winning score on a keeper on Bellwood’s first play in overtime.

Bellwood’s defense, meanwhile, would like to continue what it started in Week 1. The group was solid against a talented Eagles’ offense, limiting Tyrone to 134 total yards and forcing three turnovers.

It seems like the Blue Devils players and coaches are ready to focus in on the game Friday night. Please remember to come out and support your Blue Devils at Glendale at 7 p.m.