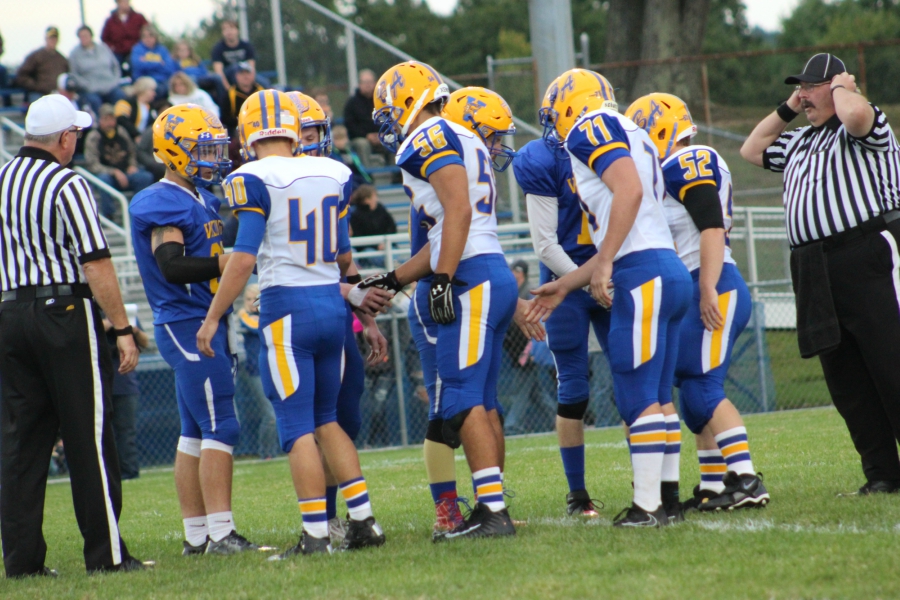 Captains meet before the game, with B-A donning the new road whits and blues.

The Bellwood-Antis Devils reigned supreme over the Glendale Vikings in last Friday’s matchup, winning on the road 38-6.

Senior running back Thor Schmittle led the attack by punching in three touchdowns, including an 18-yard touchdown carry. Schmittle is one of the primary components of Bellwood’s ground attack, which is averaging more than 170 yards per game.

“A big strong front line and a wide variety of weapons and experience has been the key to the effectiveness of our run game,” he said.

The Blue Devils’ entire backfield was firing on all cylinders, with a very spread out attack led by quarterback Shawn Wolfe, who threw for 106 yards on 6 completions. Ian McFarland had the longest pick-up in the game, pulling in a 51-yard reception.

The Viking offense struggled, only picking up 10 first downs while piling up 87 penalty yards.  B-A junior defensive end TJ Wyland had a big game on the defensive side of the ball with an interception to set up a touchdown and seven total tackles, five of which were solo.

Bellwood had no issues handling Glendale from start to finish.

“We have a lot of size and skill on the front line, and we have good linebackers making plays and good d-backs covering behind,” said senior defensive lineman Noah Aiken. “In all we have a big and talented defense able to make stops to set up for the offense.”
The Blue devils increased their record to 2-0 and 1-0 in the ICC with another dominating performance on both sides of the ball.

B-A hopes to carry the momentum into this week against Claysburg-Kimmel at home.