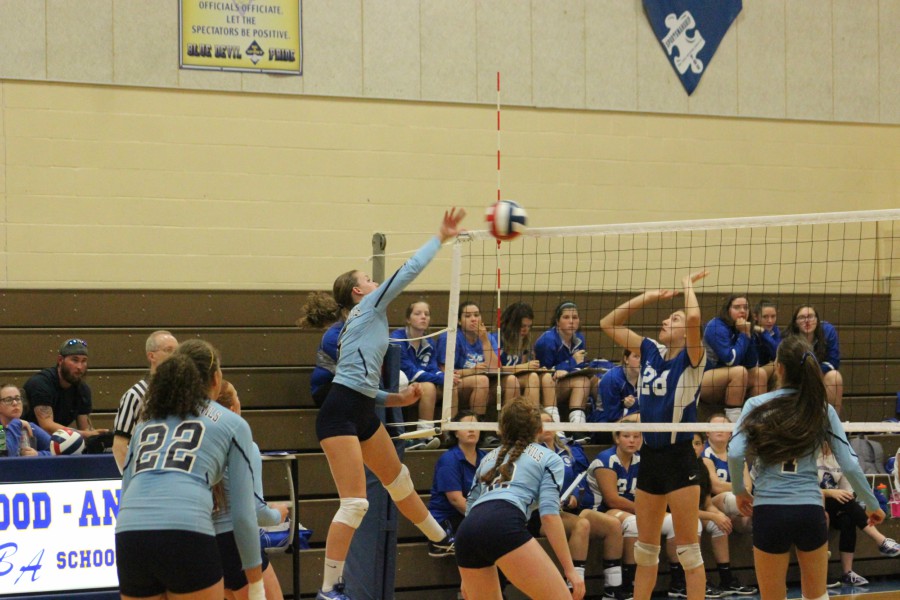 Bella Kies goes for the spike in the volleyball team's big win over Williamsburg.

Sakeria Haralson was a key player for the Lady Blue Devils, as she was able to put up 13 kills in the game. Alexis Parson and Syndey Lechner added 12 service points each, with Kamryn Mercer not far behind with 11.

“We played as a team and passed the ball well,” said Sakeria. “My teammates set me up amazingly.”

Olivia Hostler added 7 points for the Blue Pirates, and she was notably Williamsburg’s best player in the game.

Bellwood-Antis will play Everett next game in Everett.

Bellwood-Antis’s Corey Johnston hat tricks to carry the Golden Eagles to another victory
The Tyrone/Bellwood-Antis soccer team at home advanced to a 3-1 record for the season last night at the Harry K. Sickler Athletic Fields in Tyrone.

Clearfield got up to an early 1-0 lead until Corey Johnston rattled off two unanswered goals in the first half. Johnston sealed the deal with a second half goal to lift the Golden Eagles over the Clearfield Bison.

Johnston recorded his second hat trick in last night’s win which puts him at 8 goals in four games this season.

Corey has been a key factor in the Golden Eagle’s success this season, he spoke on how he’s been able to have the season he is so far.

He credited his dad and some young teammates with helping spark his early-season success.

“My dad really encourages me to keep going and work hard,” he said. “And in the offseason I played on a travel team that played a lot of games in Pittsburgh with Aiden and Alex Taylor.”

“Ethan has really helped us on defense, so it’s been really good that he came out,” Johnston said.