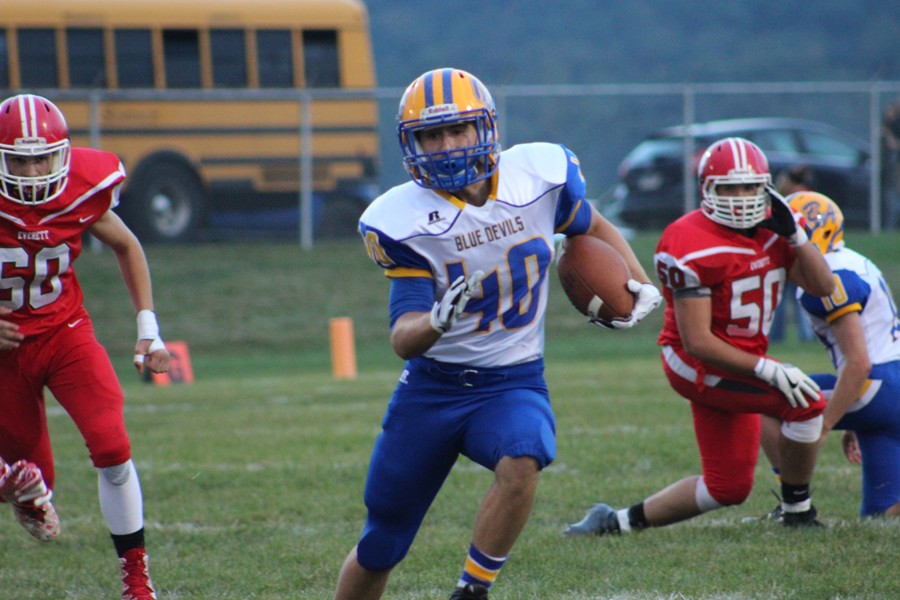 The Blue Devils’ week 4 matchup was yet another confidence builder for the squad, which advanced to 4-0 (3-0 ICC).

B-A got off to a hot start in the first quarter with Shawn Wolfe completing two touchdown passes to Eric Morder 32 and 65-yards and Nick Watters punching in a two yard touchdown on the ground.

Morder thought he had a solid game, as he was able to gain 97 yards on only two receptions. He also kept his promise of shutting down the Warriors secondary.

“We contained (Everett’s offense) and didn’t give them very many first downs,” Morder said.

With two minutes to play in the first quarter Everett hit a 22-yard field goal to try to get some momentum going.

The second quarter was all Bellwood though, as two more touchdowns came from a 36-yard Shawn Wolfe carry and a Nick Watters five-yard run.

Watters had the best game of his career against the Warriors. He was able to score more touchdowns last Friday than he did all last season while rushing for 88 yards.

“It’s pretty exciting and I’m going to strive to get more,” he said. “I owe it all to the rest of the team, they blocked and opened up their defense very well.

At halftime the Blue Devils were up 42-3, which initiated a running clock in the second half.

Bellwood-Antis would finish the job early with a Watters 44-yard run to cement the victory. Everett would score on a 14-yard pass late in the third and an early fourth quarter touchdown from the goal line.

The Blue Devils offense gained a total of 484 yards with a variety of running backs gaining yards for Bellwood.

“We came out pretty aggressive which took out some of Everett’s enthusiasm… We did a very good job,” said lineman Collin Younker.

“The offensive line was really good and it helped me a lot to score,” Nick Watters agreed.

Defensively Bellwood-Antis was just as strong.

“We got a couple good stops on the goal line, but around the fourth quarter we got a bit more lazy,” Younker said.

Eric Morder also pointed out that he felt the team is better than last year, which is something to be proud of.

“I feel like I’m better and so is the team because we beat Tyrone and all of our opponents by more points.”

This confidence is no doubt a good thing for the Blue Devils football team.

The Blue Devils play at Moshannon Valley this Friday on the road.