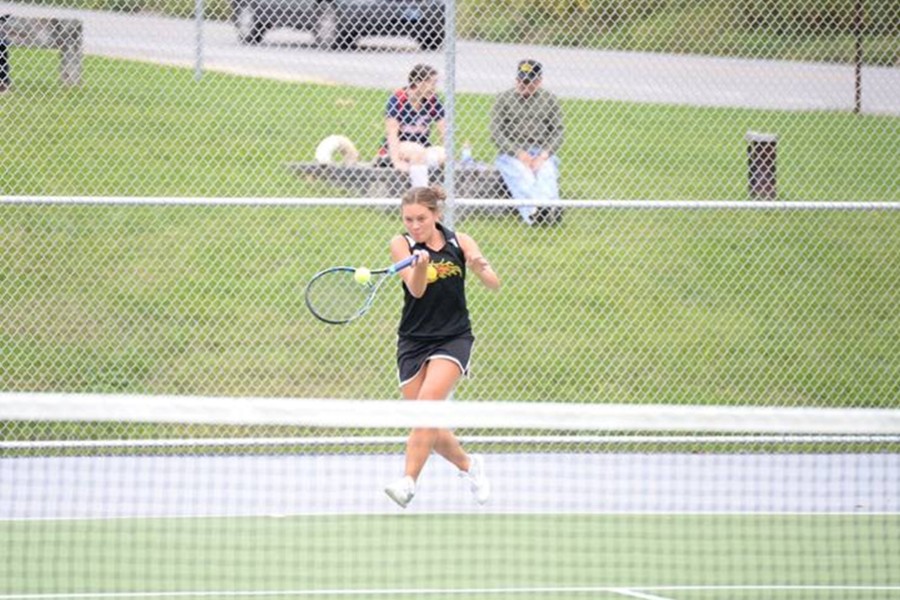 Tina Hollen took a step closer to a third consecutive Mountain League MVP with a win against Central.

The Tyrone-Bellwood women’s tennis team stole a win from Central yesterday with a score of 3-2 . Tina hollen earned another singles win and teamed with Tyrone’s Grace Gensimore for a win in doubles.

The team has now won four in a row to go to 4-2 and could clinch the Mountain League with a win over Huntingdon next week.

“It’s nice to be back on top,” said Hollen. “My freshman year we won the Mountain League, and now we’ve come full circle  back. It truly took everyone to make this happen, and it’s satisfying to see the hard work pay off.”

“I’m undefeated, although we still have to play Huntingdon,” she said. “I think my chances (of getting MVP) are pretty good considering my record.”

After playing against Williamsburg the night before, Bellwood-Antis’ depth helped the girls win in what surely was a tiring game.

Sydney Lechner, Carly Feathers, and Alexis Parson all scored 12 service points and Sakeria Harralson continued her domination at the net.

Kamryn Mercer said,“We Came back as a team and had a great game, showing teamwork can overcome any team.”

Harralson scored an impressive 21 kills. She now averages 12 kills per game, leading the team in that regard.

The win improves the Lady Blue Devils record to 4-1, marking a very good start to the season, good for second in the ICC, tied with Mount Union.

B-A will take on Moshannon Valley at home.

Jenna Bartlett continued her strong season by finishing first in 22:20, while Alexis Noel, Addyson Gilbert and Joyce Zheng were place-winners.

Robert VanKirk was B-A’s top finisher, ending up fourth with a time of 19:32. Jake Miller and Nick Padula also placed.

Soccer teams falls again
The Tyrone/Bellwood-Antis girls fought for the win but were not able to succeed against Bellefonte, losing 5-0 in Centre County.