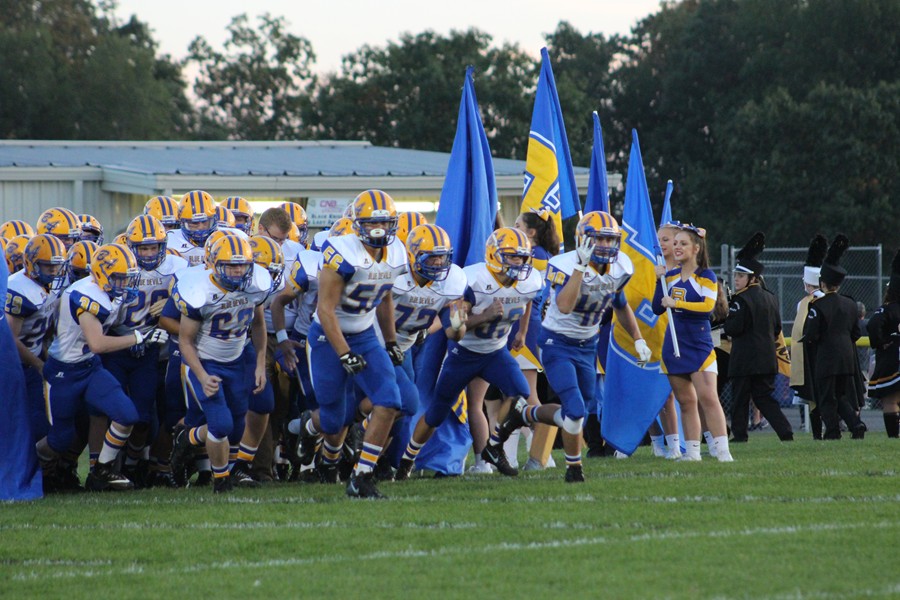 B-A takes the field looking for a dominant performance against Moshannon Valley.

Bellwood-Antis traveled out to Moshannon Valley on Friday night to absolutely tee off in the first quarter against a young Black Knights team, on its way to a 48-6 victory.

Thor Schmittle had a huge game. He had only 11 carries for 143-yards, including a 45-yard touchdown run, which was only one of  three touchdowns for the night.

The Blue Devils as a whole did extremely well on offense gaining 573 total yards.

On defense Bellwood-Antis thrived, only collapsing on one series of plays all night, leading to a Moshannon-Valley 15-yard touchdown reception in the second quarter, well after the game was in hand. Bellwood-Antis Senior linebacker Eric Morder blocked the extra point attempt by the Black Knights.

Blue Devil Senior corner/wide receiver Ian McFarland had 3 receptions for 46-yards and two touchdowns along with an interception on defense. Ian has been the leading receiver on the squad this year with 9 receptions for 234 yards and four touchdowns. On defense Ian has 27 total tackles, 4 interceptions, and 6 pass deflections.

Despite some key injuries, the B-A line was able to stick together and produce a strong running game.

“The underclass men were able to step it up and fill in some pretty big shoes, especially those of Chris Wertman,” he said.

Wertman, who had an ankle injury, was frustrated he couldn’t make the start on Friday night, but was impressed with the way his teammates performed saying, “I feel like we came out well with all the injuries and played a really good game. Jack and Noah Aiken  really stepped it up on the defensive line.”

The Blue Devils are looking to dominate another ICC opponent this week at Memorial Field on Homecoming against Williamsburg. Come out this Friday to support the girls on the Homecoming court.