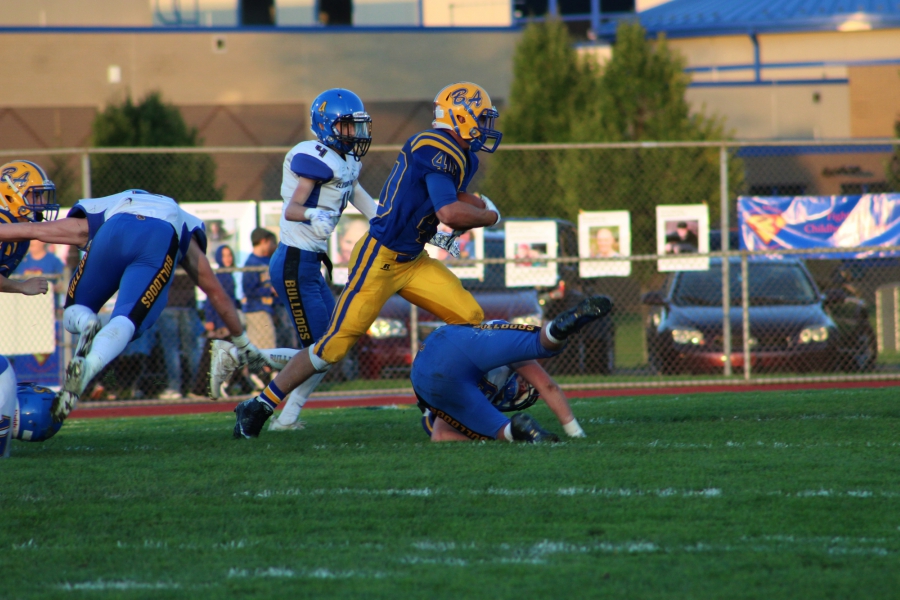 Nick Watters had himself a game in B-A's Homecoming victory over Willliamsburg.

(EDITOR’S NOTE: We will be updating this story later this week with a full slide show from the game. Check back soon!)

Bellwood-Antis didn’t give the Blue Pirates many chances, only giving up 5 first downs on 41 total plays from the line of scrimmage.

BA jumped out to a quick lead in the first with a Nick Watters 38-yard touchdown run  followed up by a Schmoke 36-yard field goal. The second quarter was quiet with only one touchdown coming from the Blue Devils with a 5-yard Thor Schmittle touchdown run with a minute till the half.

Bellwood-Antis shut the door early in the fourth quarter, finishing off the drive with a 1-yard touchdown run four seconds into the quarter. Freshman Zach Mallon had the last score of the game after he took a punt 39-yard back to the house to finish a 45-0 shutout of the Blue Pirates.

Watters led the team with a total of 73 yards, 8 carries, and 2 touchdowns. Eric Morder was close behind with 67 yards and 7 carries.

“Our team as a whole works together very well and that’s why as a team we can all be successful. Without any of the other players I wouldn’t have been able to score as easily. It’s great that we all get along so well,” said Watters.

Senior lineman Jack Showalter led the defense in the shutout on 8 total tackles, 4 solo, and 2 tackles for a loss.

Jack is a 4 year lineman on the varsity squad and shows to up to every early morning lifting and every team function. He is a true leader on and off of the field, fellow Senior Noah Aiken had some lofty words for his fellow lineman saying “Jack is a crucial part of our veteran line, he knows all the plays and what everyone’s supposed to do, without him we would be lost.”

This week the Blue Devils look to stay unbeaten in a home conference game against the West Branch Warriors.