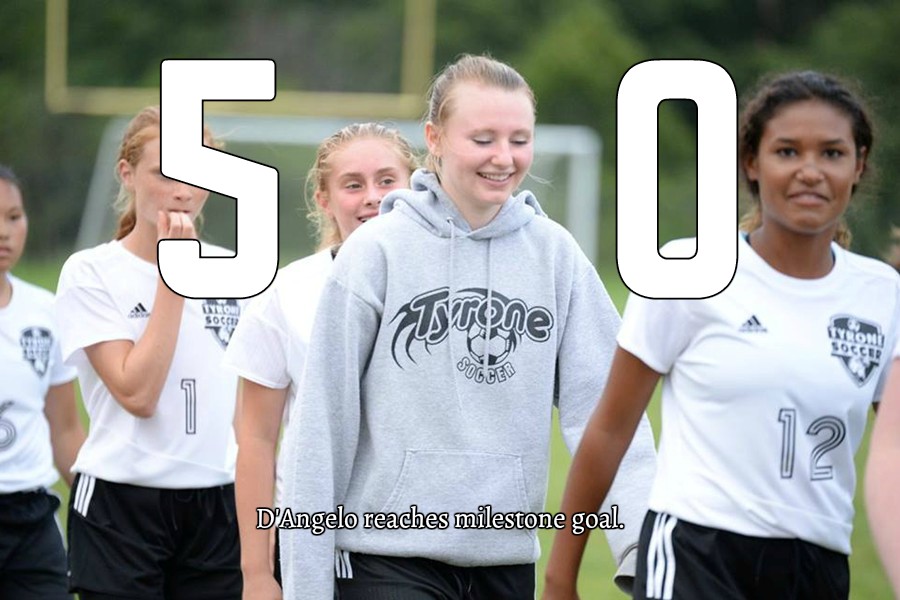 Bellwood-Antis junior Riley D’Angelo scored her 50th high school goal in a game against Hollidaysburg yesterday while playing for the Tyrone/Bellwood-Antis co-op team.

D’Angelo’s marker was a bright spot in the away loss for the Lady Eagles, since she scored the only goal in the 5-1 loss.

Hollidaysburg was able to score twice in the first half and three times in the second, dropping Tyrone’s record to 2-9.

“It was exciting, and I’m grateful for the opportunity and my teammates,” said Riley.

The Lady Eagles will resume their season tonight against an 8-2-1 Central at home in Tyrone at the Harry K. Sickler Athletic Park.

The B-A sophomore has been scoring at a blistering pace this season and has been a great striker for the Tyrone/Bellwood-Antis boys soccer team.

Johnston struck twice in the first half and once in the second as the Golden Eagles won 6-2.

This game has improved the Golden Eagles record to 6-2-1 in Mountain League play.

Tyrone will return to action Wednesday at home against the Huntingdon Bearcats.

The Bellwood-Antis team has not announced any individual stats, a sign that their win came from good team work.

The Volleyball team will be traveling to Glendale for their next match at 6:00 tonight.

Grier topped the Lady Eagles 4-1 with Tyrone’s only set win coming from a doubles win from Tyrone students Lara Pilgrim and Emilee Walk.

Hollen will play today at the Leopold Tennis courts in Altoona.