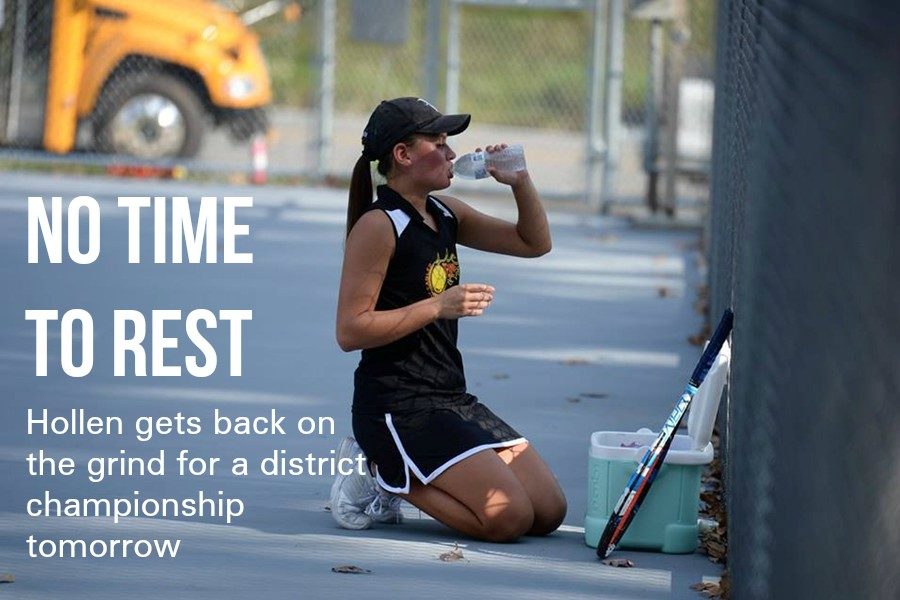 Tina Hollen is in the hunt for a District 6 single tennis championship.

Bellwood-Antis senior Tina Hollen got three steps closer to a District 6 2A tennis championship yesterday at the Leopold Tennis Courts in Altoona.

Tina won all three of her tournament matches to advance to the singles championship tomorrow against Central Cambria’s Olivia Ratchford.

Tina is seeded No. 1 and Ratchford is 2.

“I’m glad I made it through the day, but ultimately the focus is on tomorrow,” Tina said.

Now her focus is on Ratchford, and Tina said she needs to play with discipline in order to bring home a singles title.

“I expect consistency from her and for her to be a wall,” said Tina. “I will have to be smart and keep a level head and chose what shots to look for and which shots not to go for. My percentage of error against her will be very small.”

The championship will beheld tomorrow at 3 p.m. at Leopold.

The girls team fared better than the boys with Jenna Bartlett finishing first overall in the girls heat.

This helps Bartlett as she continues to garner points toward an ICC all-star.

Bartlett was trailed by three Southern Fulton runners and finally by Adisyn Gilbert who finished fifth.

VanKirk was followed by Jake Miller and three other Blue Devil runners but it wasn’t enough as B-A lost the meet 17-38.

This gives the boys their first loss against ICC competition and drops their overall record to 5-2.

Senior leadership helps B-A against Glendale
The Bellwood-Antis Lady Blue Devils volleyball team was able to win in a tight game against Glendale yesterday away from home.

Seniors Kamryn Mercer and Alexis Parson were a big help in the win since they scored 13 and 12 service points respectively in the win.

Sophomores Bella Kies and Sydney Lechner also played a big role in the win with the latter scoring 14 service points and the former adding 33 assists throughout the match.

The Lady Blue Devils will return to play Thursday at home.