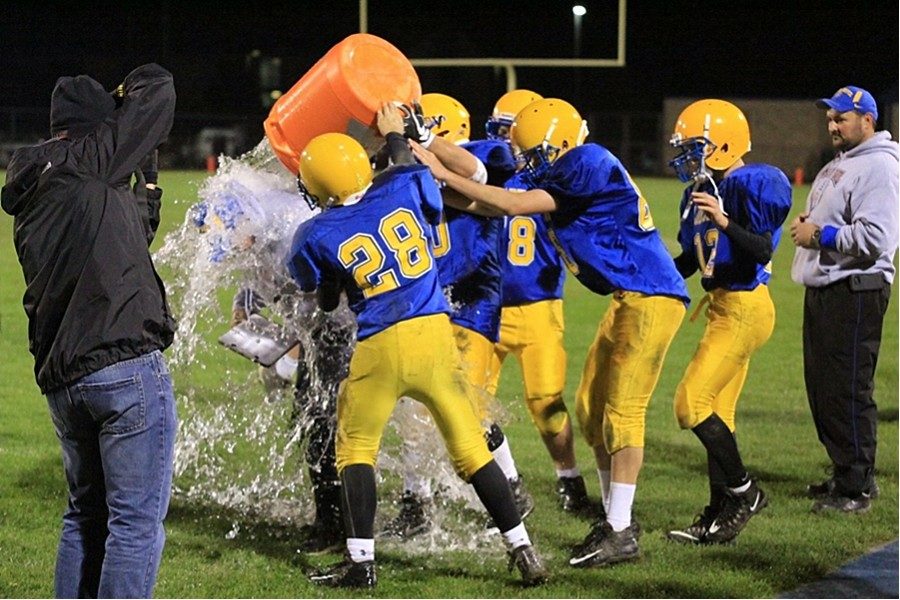 Coach Burch receives a water bucket shower at the end of the game last week. B-A defeated Southern Huntingdon to finish the season undefeated and win the ICC title.

The Bellwood-Antis football program made history last week, thanks in part to the junior high team’s win Thursday over Southern Huntington.

All three teams finished the regular season without a loss.

With an undefeated record of 9-0-0, the junior high team took the ICC championship.

Head coach Mr. Charlie Burch, who is in his twenty-first year of coaching the junior high team, was ecstatic about their record.

“It is awesome to get (an undefeated season) in the first year of the junior high in the new format of just seventh and eighth grade. I thought we could have a special season when I met this crew of guys back in late February,” he said.

In addition to junior high, the junior varsity and varsity football squads also went undefeated this season, a feat that has not happened in any modern history of the program.

“This is a great achievement for our program, school, and community! I am glad to be a part of this,” Mr. Burch said. “We didn’t want to mess up when the JV went 7-0, and I anticipated the varsity finishing off the season 10-0.”

The Devils fell behind in their game to the Rockets 8-0 after the first quarter but bounced back with Connor Gibbons scoring three touchdowns over the next two quarters to stake B-A to a big lead. Guyer also added a score on a 4-yard pass from Pellegrine, who had a pair of touchdown tosses.

On top of it all, Mr. Burch discovered that the win brought him to a total of 150 in his coaching career.

“I am honored to be coaching at BA for so long and making a positive impact on the program,” he said. “I owe it to my loyal and hard-working assistant coaches and the great players in our program over the past 21 seasons.”