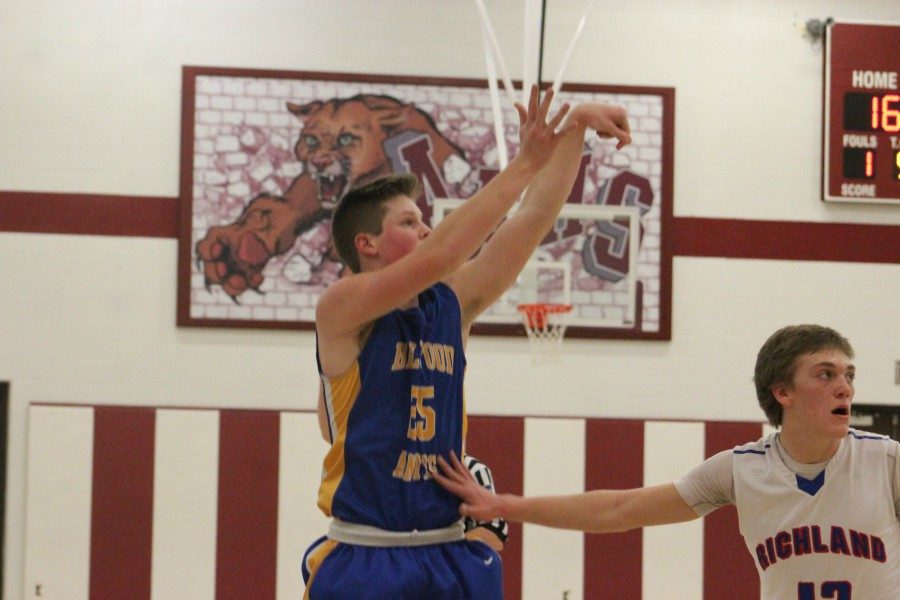 Senior Trent Walker returns as B-A's leading scorer from a year ago.

Coming off a 18-8 season where they bowed out of the PIAA basketball playoffs after the first round, the Bellwood-Antis boys basketball team looks to improve with a new coach at the helm.

Kevin Conlon, brother of sixth grade B-A teacher Mr. Steve Conlon, is excited to come back home to Bellwood-Antis and coach a new class of students.

“It’s a challenge (to be a head coach), especially with a family, but I love basketball and I’m looking forward to giving it a shot,” said Conlon, a 1,000-point scorer who graduated in 2001.

Conlon, who has coached the Pitt-Greensburg’s womens basketball team and was an assistant on last season’s team under Coach Gerwert, believes that teams are underestimating the Blue Devils this season.

“I think most teams think we’ll take a step back because we lost three starters, but I think they underestimate us,” he said.

Conlon has a point here. After graduating five seniors, including three of their top five scorers, the boys will have to look for underclassmen to step up – and with the largest roster since 2009, 19 players, there are plenty of boys who could be given an opportunity.

Juniors Nathan Wolfe (center) and TJ Wyland (guard), will try to solidify a spot in the senior dominated roster, and with their height they should be given a chance. Wolfe, who is a solid figure at 6”5’, played in 17 games last season and Wyland, 6’1”, saw time in eight games for the Blue Devils.

“He is definitely bringing in a lot of new things and I think the season will go well because of that,” said junior point-guard, Alex Frederick.

Shooting guard Trent Walker will look to better his performance from last season, when he led the team in points with 426 through 26 games. The senior has played more than 20 games every year since freshman season and will be an integral part of the Blue Devils squad, win or lose.

Also looking to play a big role in B-A’s starting five, are seniors Clay Engle and Tanner Worthing. Engle averaged 7.6 points and 3 rebounds per game last season, and given more opportunity this year, he should be able to better those numbers. Engle, like Walker and Worthing, was named a captain on the team and as such, he has high expectations.

“I expect we will win districts and advance into the state playoffs as far as we can,” Engle said.

Tanner Worthing, another player with four years of experience, will look to hold down a starting spot on the varsity team for the first time in his career. Worthing also subscribes to Engle’s belief in the team as a whole.

“I think we have a lot of potential with three starters returning back from last year, and we have some very promising underclassmen,” Worthing claimed.

The 2017-18 season should be one of promise for the Blue Devils. The biggest strength on the team will definitely be their depth, with more than eight players capable of playing on the court in a starting position this year. Although the team is big in roster size, the team is on the small side in terms of height. There are only two players on the team topping 6’2” and both are centers; after that most of the team rounds out around 6’0”.

The biggest issue the team faces could be adjusting to a new coach, although Conlon and his players seem to disagree with that notion.

“We’ve changed the way we play defense a bit and we’ve added a lot of new plays. I think the kids are catching on well,” Conlon said.

“I think (coach Conlon) has a lot concepts that are easy to buy into and everyone is picking up the new plays pretty well,” Engle agreed.

With players buying in to the new systems, talented players and a deep roster, this season might be one to remember.

The Blue Devils will start their season Friday night against rival Tyrone at Bellwood 7:30.