Blue Devils come back to defeat C-K by 24 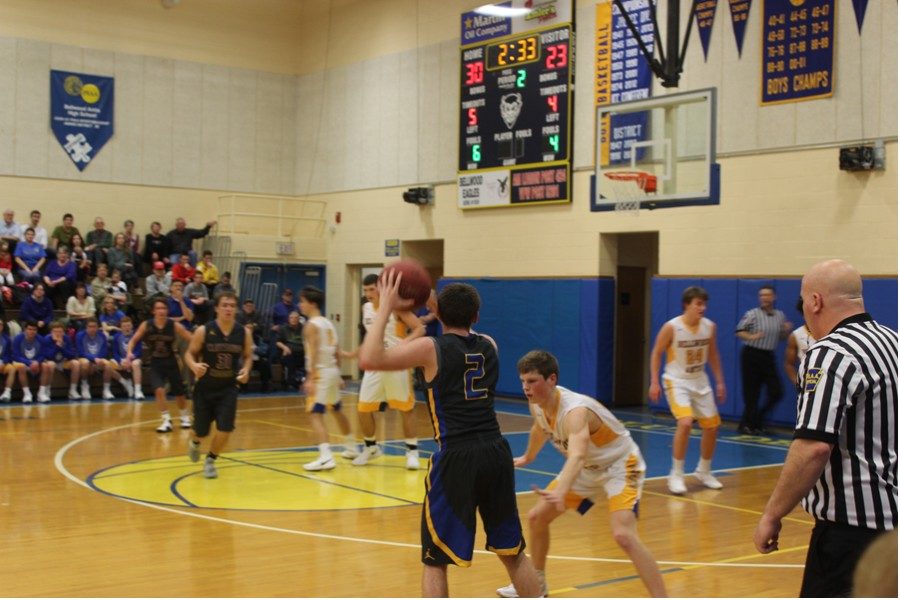 Walker was splashing threes all night, but that didn't stop him from focusing on defense. (Nick Caracciolo)

Walker scored 27 points to lead the way with his third consecutive 20-plus point game.

Although it wasn’t all domination on the court for Bellwood-Antis, the team was able to recgroup after the first quarter and outscore the Bulldogs in all three following quarters.

The first quarter started off with the Blue Devils unable to prevent C-K’s guards from getting to the hoop and the Bulldogs put up 18 points. On the other side of the court, B-A did well to score against Claysburg-Kimmel’s 2-3 zone defense and put up 17.

Bellwood-Antis was able to take it to the Bulldogs the rest of the game. When the Bulldogs scored 11, B-A countered with 20 in the second quarter, giving the Blue Devils a 37-29 point lead, mostly on the backs of seniors Clay Engle and Walker, who combined for 45 points.

Engle lead the team with a shooting percentage of 62%, and Walker wasn’t that far behind with a 59%. Walker also went 7 for 11 on three point opportunities by the end of the game.

In the second though, Bellwood-Antis continued to dominate and scored 25 points in the third quarter and upped their lead to 19. By the fourth quarter, the game was near over, yet B-A’s shooters still outplayed the Bulldog’s and ended the game with a big lead of 24 points.

When added to the last game, the Devils showed that they can put up points against ICC teams, and the Blue Devils have out-scored their opponents in the last two games by over 15 points.

The Blue Devils look to do the same against Williamsburg tonight, but will face a strong team, albeit a small one. The game will be played at 7:30 in Williamsburg.

Williamsburg lost its only game of the season so far to Central 69-57; Central lost to Tyrone last week in O.T. Tyrone, of course, beat B-A in the home opener and with the commonality of the scores, this match-up should be a good one in Williamsburg tonight.