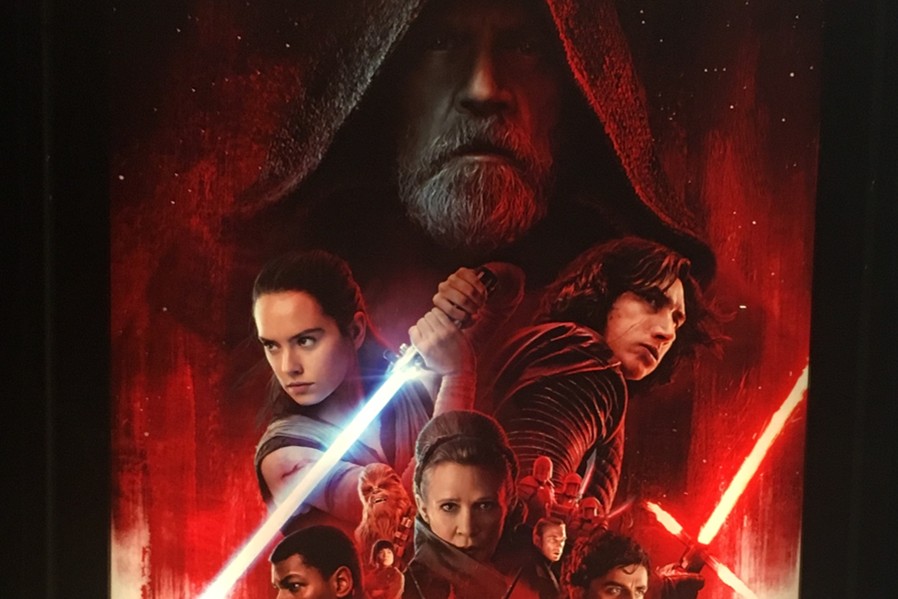 The Last Jedi premiered at the Big D in Altoona last week.

Back in December of 2015, theaters began to fill with storm troopers, Jedi, and Siths. Ticket sales blew sky-high, and sold-out theaters were packed full with fans. As the lights went off and the title screen flashed onto the screen, cheering could be heard around the world. Thus, began a new era of Star Wars movies.

When The Force Awakens was released, it brought Star Wars to a new generation of fans. It introduced a new Rebellion and a new darkness: The First Order. The movie introduced us to a multitude of new characters: Rey, a seemingly Force-sensitive girl from Jakku, and an anger-driven apprentice of the dark side, Kylo Ren. Since then, questions have been asked that cannot be answered easily: who are Rey’s parents? Who is Snoke? What is Luke going to do with Rey? Are the Jedi going to rise again? And now, they are finally answered. Well, some of them.

The Last Jedi is the next installment to the new Star Wars trilogy.

The movie starts off right after The Force Awakens… literally. After a fierce space battle between the Rebellion and The First Order, we find ourselves reliving the moment Rey hands Luke’s lightsaber to the man himself.

As the movie progresses, it can be soon realized that Luke has definitely changed. He is fairly against Rey being anywhere near him, ignores her and repeatedly tells her to “go away” (at least we hear him speak in this movie!). Eventually, Luke explains that he believes the Jedi must come to the end. Luke’s path in this movie is something that most Star Wars fans cannot agree with. However, it just seems to fit. As the remarkable Mark Hamill himself believes, it is wrong, but right.

The acting of Mark in this film is definitely ‘Mark Hamill’-esque, although the comic relief can be a bit much. However, in the long-run, he makes his character the best it can be. After such, Luke is funny, serious, and is probably one of the most influential fictional characters in history. He still continues to amaze his fans and will always inspire those who take Star Wars very seriously.

Rey, too, is in conflict. When Luke finally decides to start some training, she finds herself walking the line between the dark and the light side of the force. Moreso does Kylo Ren, aka Ben Solo, for he is still in strong internal conflict with his own destiny and goals. Both of their directions in this film are something that seems to follow what they were like in The Force Awakens. However, especially for Kylo, there is a lot of character development that occurs. Overall, I think that both Rey’s and Kylo’s characters are portrayed properly in this film, and that their directions and actions are some of the only ones that seem to be going the right direction for who they are.

This movie also continues to follow Finn, the ex-stormtrooper turned good. He finds himself taking it upon himself to save the Rebellion and goes on a mission to do so. As he does so, he befriends an engineer named Rose, who follows him on his journey. Finn’s character in this movie seems to be a little off and bland. He still portrays the same personality but it seems like he is lacking in moral and character development yet. In The Force Awakens he seems to have gone through some changes in the beginning of the movie and is trying to be a good guy. Since then, we haven’t seen much of a change from him, which is a bit of a disappointment. In addition, the movie adds Rose into the picture. Her story is something that seems a little bit out of the blue. Overall, Rose and Finn’s part of this story seems to be nothing more than screen time. But on the positive side, their journey does add some amazing scenes to the movie and it introduces some new characters and developments. There are some new developments in their story that I do believe are important, but to avoid spoilers, they won’t be discussed.

As for the long run, aside from certain incompatible character developments, this movie is up there with A New Hope with how good it is. In personal opinion, The Last Jedi was gorgeous and was worth the wait. The events that occur are definitely unexpected, and that’s what makes it good. I would give this movie a solid 9.5 out of 10. I would recommend it to any and all Star Wars fans, as well as for anyone who is into sci-fi, action, space, or adventure.