Katie Dickson continues to serve district as a volunteer. 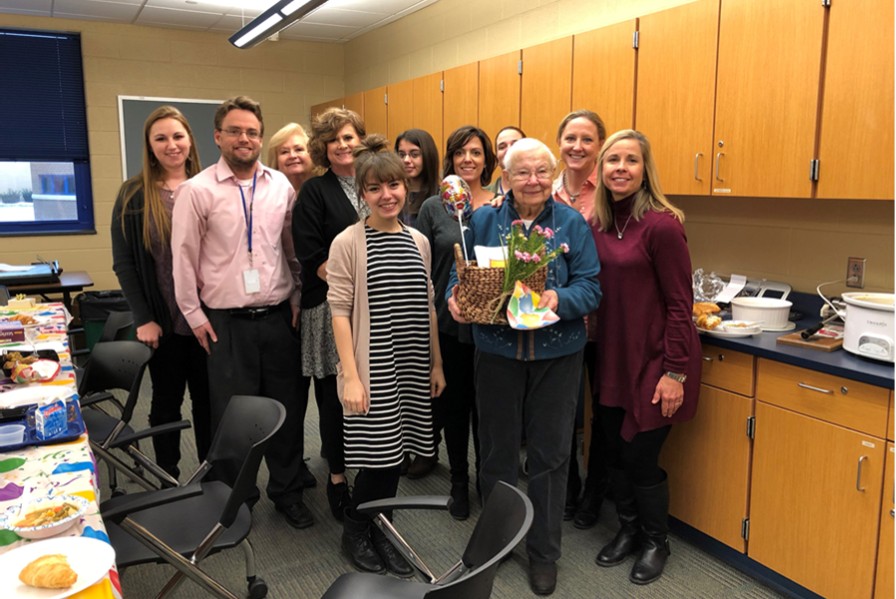 Teachers at Myers had a surprise 90th birthday party for volunteer Kathy Dickson.

The word retire to most people means to stop working, and take a break from what they were doing before, but that’s nowhere close to what Katie Dickson did when she retired from Bellwood-Antis in the late 90s. The truth is she hasn’t stopped working since she retired, and she got the chance to celebrate that yesterday.

Mrs. Dickson celebrated her 90th birthday on January 8 with a party thrown in her honor by Myers teachers.

She retired from  teaching 19 years ago at the end of the 1997-98 academic year after working at Bellwood her whole teaching career as a third grade teacher.

“I still remember how kind she was to all of us,” said high school secretary Amy Chamberlin, who was a pupil of Mrs. Dickson in elementary school.

Mrs. Dickson is a graduate of Bellwood-Antis High School who was raised in Tipton, which is why Bellwood is so special to her. Since her retirement she continued to volunteer her time at the elementary school almost daily helping with whatever she can.

Much of her work consists of making copies and doing cutting for the second grade team, although it is not limited to one grade level.

Mrs. Dickson said the experience of being a teacher who benefitted from help with the daily chores of the job inspired her to volunteer in her retirement.

“I realized how valuable it was when I had help. I wanted to help others,” said Mrs. Dickson.

“She doesn’t back down from a challenge and always says positive. She’s a true inspiration,” said Mrs. Chamberlin.

Mrs. Dickson is also involved in the District Foundation as well as the B-A Alumni Society, B-A Public Library and Bellwood Historical Society.

She said she is thankful for being able to still get around and credits her ability to stay active to her positive attitude.