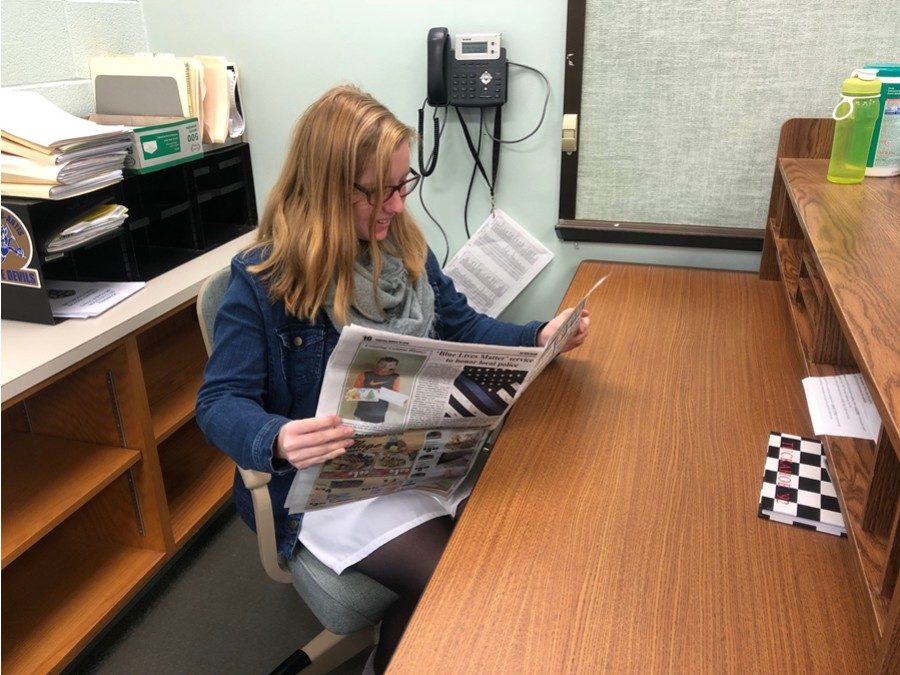 Julie Bauer won the local It Can Wait Contest.

Over the last few years, the PNA (Pennsylvania Newspaper Association) in partnership with local newspapers and AT&T, have held the “It Can Wait” editorial contest to spread awareness about distracted driving. Open to all PA high school students, the contest asks entrees to answer one simple question:  “Why is it important to take the It Can Wait pledge that distracted driving is never okay?”

In this year’s contest, Julie took the cake.

“The idea of having one of my essays published in The Herald appealed to me. Also, I thought it would be nice to put the money towards college if I won it,” said Julie.

Julie’s award recognition begs the question: what was Julie’s essay on?

“We appreciated Julie’s entry in the It Can Wait essay contest,” said Julie White, News Editor at the Herald.  “Her example citing the tragedy of a young football player who lost his life through texting and driving, and then the subsequent guilt and grief felt by his parents and teammates painted a realistic picture of the results of a life taken too soon.”

Earning top prize won Julie $100, and her entry will now be submitted to the state contest, where she could win up to $500 and earn a place at the PNA Keystone Press Awards luncheon in March.

The B-A Senior was very much caught off guard when she found she had won.

“I was surprised! After I submitted it I was pretty satisfied with it, but I didn’t know what kind of competition I would be against. I was pretty excited to see my writing published in a physical newspaper,” said Bauer.

Despite Julie’s surprise, her story was an obvious choice for those who judged at the Daily Herald.

“Her entry was nearly flawless, which stood out to us,” said White.

The big idea of it all was to spread awareness of the dangers involved with texting and driving, which Julie accomplished with eloquence.

“It’s important to spread awareness of distracted driving because it is extremely dangerous,” harped Bauer.“In my research for the essay, I learned that texting and driving is six times more likely to cause an accident than drunk driving, for example.

Julie’s research and dedication to her story not only won the contest, but that was also where she found the most joy in creating her story.

“My favorite part of writing this essay was picking the statistics and stories that I thought would be the most persuasive, and synthesizing them into the essay,” said Juile.

Over all, Julie White and the writers at The Herald support the contest in place to spread awareness and push prevention.

White said, “We were glad to receive all of the entries in the contest. We hope that area students have taken the pledge to stay safe and not text and drive.”