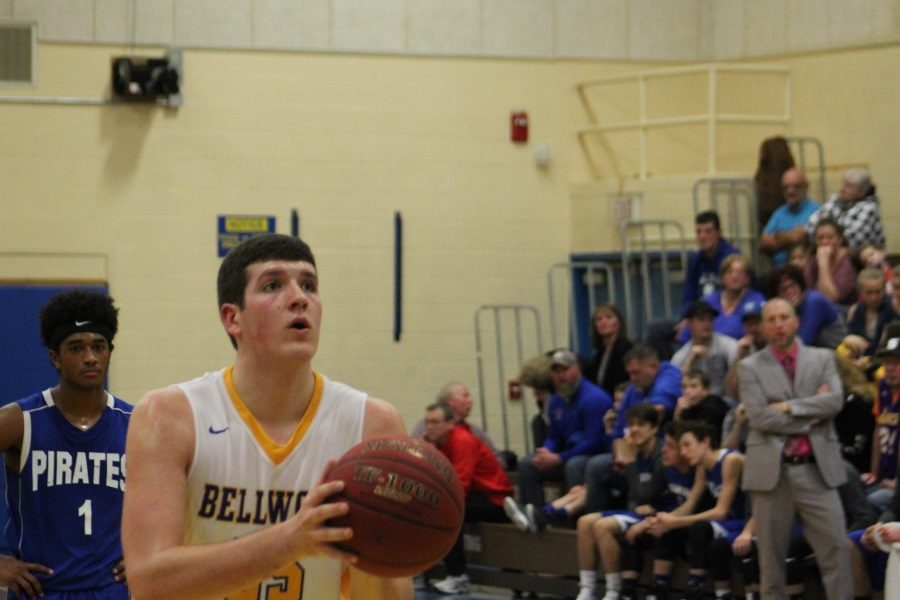 Junior Nate Wolfe had a huge game for the Blue Devils against Williamsburg.

Nathaniel Wolfe, affectionately nicknamed ‘Big Nate’ by his teammates, stepped up when it mattered most for the Blue Devils last night in their 65-58 win against Williamsburg last night at Bellwood. The junior scored a season high 22 points, with only two coming from the line.

Wolfe has been playing a somewhat limited role for the Blue Devils this season, but his playing time has steadily risen throughout the year. Before last night, Wolfe has averaged nearly eight points per game, and his shooting percentage rarely isn’t above 50%.

Wolfe was joined by senior Tanner Worthing as the only Blue Devils to score over 20 points last night, and Clay Engle was good for 16 on the night. Senior Trent Walker, who scored his 1000th point was a non-factor on the scoreboard, but often controlled play for B-A and was an integral factor on the floor despite playing while ill.

Bellwood-Antis’ and Williamsburg started the game scoring early and often, but by the end of the first quarter the Blue Devils came out with the lead 18-14. The second quarter was more contested and after a few late baskets, Williamsburg cut the lead down to three points with the score at halftime being 33-30.

By the third quarter, the game continued to be an up and down frenzy, with excitement, offensively and defensively, coming at both ends of the court. The Blue Devils, carrying a 52-47 lead into the fourth picked up their game defensively held Williamsburg to nine points in the quarter until a late steal gave the Blue Pirates an easy, albeit meaningless 2 points with four seconds left.

This win improves the Blue Devils record to 11-3, one win better than their record after 14 games last year. The boys will play again against (8-3) Southern Fulton Wednesday in Warfordsburg.