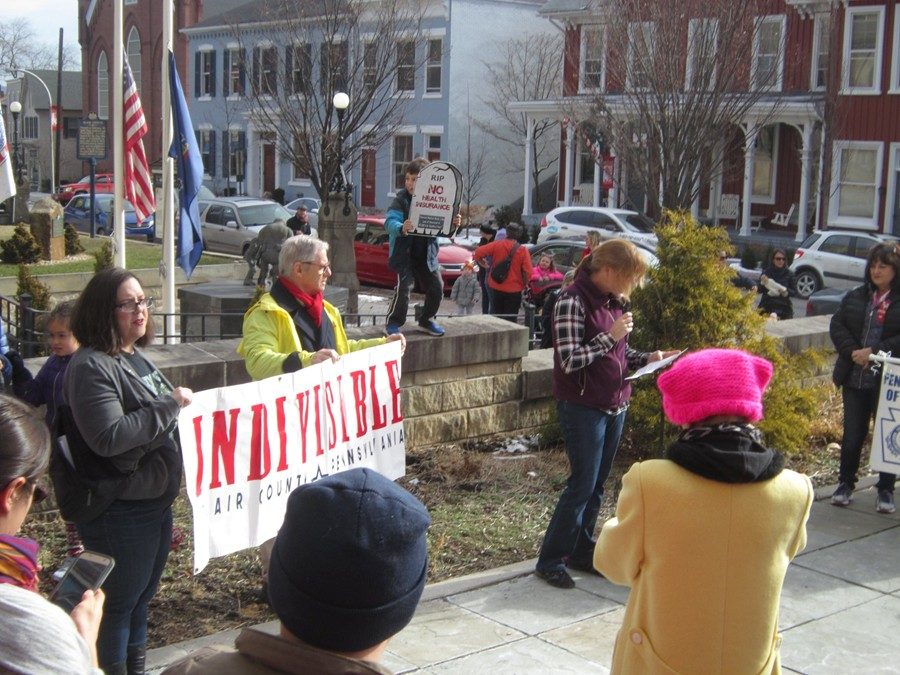 Hundreds of people participated in the Women's Rights March in Hollidaysburg on January 20.

Bellwood-Antis senior Jake Miller isn’t the type of person to express his political beliefs through marches and demonstrations, but his mother is.

And while that philosophy is contradictory to his own, he appreciates his mother’s passion.

“She is a strong person and I appreciate having that in my life,” said Jake in regards to his mother, Sarah Chamberlain.

The movement modeled many others like it around the country and other parts of the world, where millions of women rallied to support their cause and spread awareness of Women’s Rights and the #MeToo Movement. Freshman Andy Miller attended and saw his mother Sarah address the crowd as a featured speaker.

“In 2017, I went to the Women’s March in Washington with my 80-year old mother and 13-year old son,” said Ms. Chamberlain.  “I came back energized and inspired, and I wanted to turn that energy into action.”

When it came time for Sarah to speak last weekend, she brought some important ideas to the table, including her discontent with the Trump Administration.

“I related how I disagreed with the direction our current Administration is taking and how I quickly came to realize that if I wanted to protect the progressive values I hold dear, I would have to fight for them,” she said.

Sarah also emphasized that demonstrations like Saturday must eventually turn to actions.

“We want to turn all of our actions in 2017 into votes at the ballot box in 2018, with the goal of electing progressive candidates up and down the ballot from local to state to national.”

Sarah said she felt the Women’s Marches that permeated last week showed how capable the public is of having its voice heard.

“I believe that if we want people in government who truly represent us and the issues we care about, we have to elect more progressive women and progressive people of color. The demographic of America is changing, yet our representatives are not mirroring this change,” Ms. Chamberlain said.  “As a result many people in this country are feeling increasingly marginalized.  Events like the Women’s March bring visibility to our cause and let people who may feel disenfranchised know that they have a community that welcomes and supports them”

As for Andy, a freshman at Bellwood-Antis, he found his mother’s speech to be very moving.

“My mom’s speech was very personal. It talked about how she felt empowered by the Women’s March, enough to start her own organization to try and combat current administration’s policies,” said Andy.

In the end, Sarah was an inspiration to her children as much as she was to the large mass of people gathered in Hollidaysburg.

“I wanted to stand up for what I believed in,” said Andy. “I believe many people’s rights are being threatened under the current administration, so we have to be active and do things like march and protest to make sure our voices are heard.”