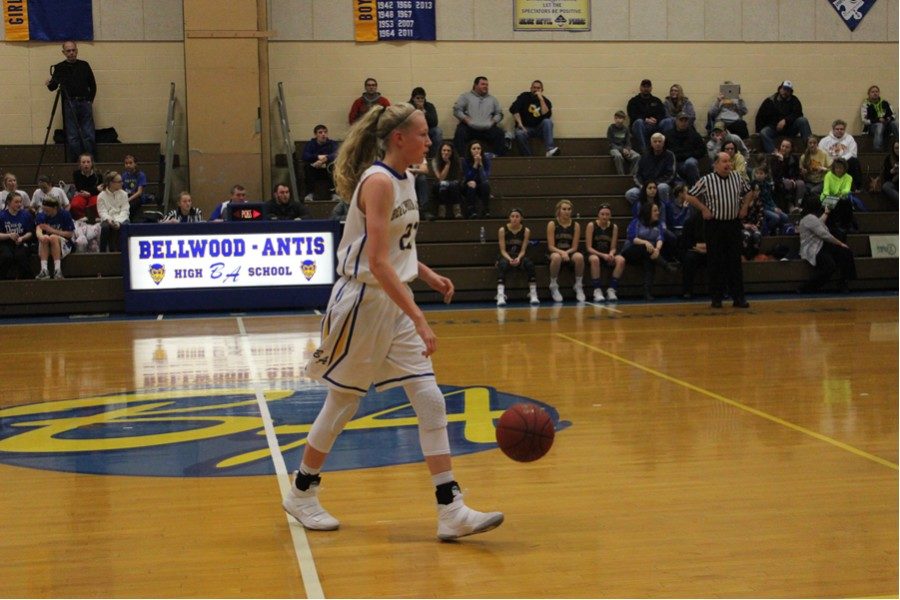 Alli Campbell has a chance to reach 1,000 points faster than any player in B-A history tonight at home against Mount Union.

Alli Campbell was always regarded as one of the best girls basketball players at B-A, and she can add another accolade onto her resume tonight when the girls team takes on Mount Union at 7:30 at Bellwood-Antis high school.

One of the top sophomore recruits in the nation, Campbell currently rests at 973 varsity points, 27 away from the fabled 1k marker. This margin of points wouldn’t normally be something a high school player would get in one game, but for Campbell, who averages just over 26 points per game, it’s very possible and even likely.

Senior Tina Hollen, someone who has played with a couple thousand-point scorers in Karson Swogger as well as her sister Ana, sees Campbell as a special type of player.

“(Alli)’s a sophomore and she’s the only person I know who got into (basketball), so young. But what really makes her stand out is her determination to never give up,” Hollen explained.

If the sophomore hits 1,000 points tonight, she will be the fastest girls (and boys for that matter) basketball player to reach the 1k mark.

Campbell will reach the milestone in an astounding 48 games. For comparison, Karson Swogger, who mentored Campbell last year when she was a senior on the team, reached the milestone on her first game of her junior season, after 58 games.

“I’ve never coached a player who has done this in less time,” Swaney said of Campbell, yet he hesitates to compare her to Swogger.

“Karson and Alli have both been outstanding student athletes for our school district and program. Karson had a great high school career, but now it’s Alli’s turn to write her story,” Swaney elaborated.

Just to note: Swogger is also the all-time points leader at B-A and in Blair County, leading one to believe Campbell has a good chance to overtake Swogger by her senior year.

The rest of the girls team will be looking to take their 16th win of the season tonight against Mount Union. The Lady Trojans are 7-8 and 4-5 in the ICC, and are coming off a 70-23 loss at the hands of ICC leaders Juniata Valley.

With a win tonight the Lady Blue Devils will improve their record to an impressive 16-2, with their only losses coming against Altoona and the aforementioned Juniata Valley.