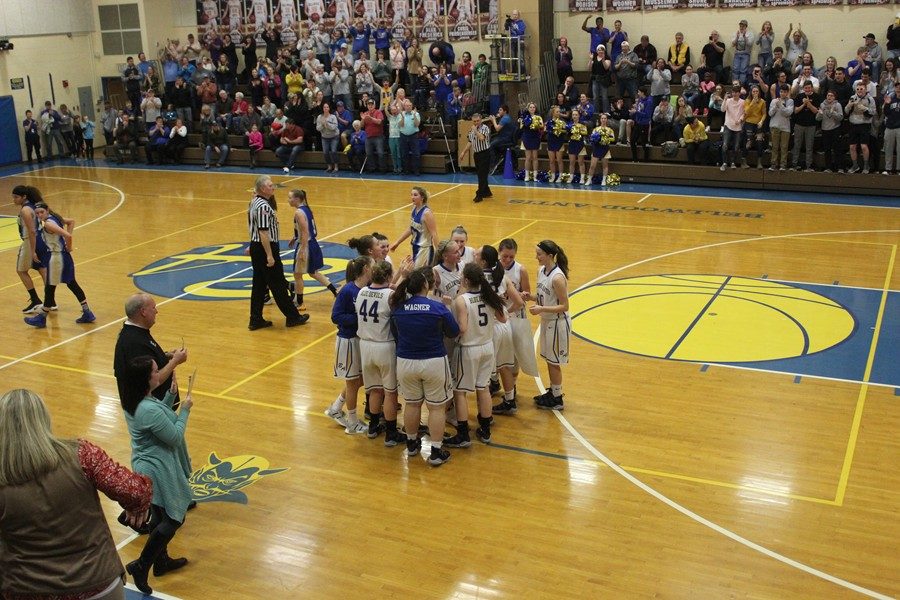 Alli Campbell is mobbed by her teammates after sinking a three to reach the 1,000-point mark for her career.

The contest ended with B-A rolling to another victory, 90-34. The high powered B-A offense was just too much for the Lady Trojans.

Bellwood-Antis has been pushing the pace all season thanks to veteran Coach Jim Swaney and his fast-paced offense.

“We have always tried to run a up tempo game. I have always believed in transition from defense to offense and to attack the opponents defense,” Swaney said.

The Devils offense has been great this season, averaging 71 points per game. A lot of the reason for that success on offense is because of Sophomore Alli Campbell, who is averaging 26.2 points a game and has been held under 20 points in only 3 out of 17 games.

Last night Campbell had a memorable night as she scored 27 points to hit her career 1,000-point mark after just 48 games. She also pulled 9 rebounds, and had 9 assists and 6 steals.

“I never thought I would do it this soon, but we have a lot of team goals to achieve now,” said Campbell.

Bellwood-Antis is currently third in District 6 2Arankings with only four games left to play this regular season, including a game at ICC leading Juniata Valley next week.

The Lady Blue Devils hope to continue their momentum into the final stretch of the season against Glendale Thursday night at home.