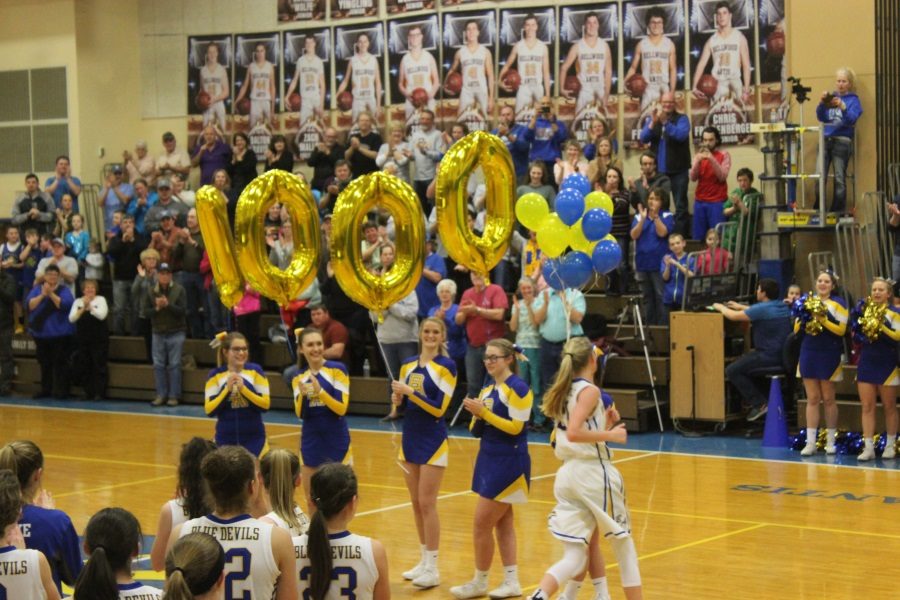 Alli Campbell runs past the cheerleaders as her team watches

After 48 games as a sophomore and freshman, Alli Campbell reached the 1,000-point milestone Tuesday night against Mount Union.

Luckily for fans of Bellwood-Antis, Campbell hit the mark at home, and she was able to celebrate the achievement with her family. Campbell also was presented with gold “1000” balloons and flowers from the cheerleaders and other families. She was also congratulated by her coach, Jim Swaney, who was proud of his star sophomore.

“Last night was very special. Any time a player who is in your program reaches the 1,000-point mark it is a great accomplishment for her and the program,” Swaney said.

“One thousand points is a very high goal to reach, and to do that as quickly as she has just validates what a special player she is.”

Campbell felt that it was nice to get the milestone out of the way this early in the year.

“It felt good to get it out of the way, especially before senior night,” she explained with poise. “I never thought it would happen this soon, but now we have team goals to focus on.”

Campbell is the eleventh Lady Devil to reach 1,000 points, and the fifth in the last six seasons.

As her star power increased through her freshman and sophomore years, it looked like more of a formality that Campbell would reach the 1k milestone, but this doesn’t at all discount the achievement; rather, it is a testament to how good of a player Campbell is.

After hitting this goal, the point guard could rest on her laurels, but instead looks to the next milestone, the 2,000-point mark, and after that the school record set by former teammate Karson Swogger. Set at 2,520 points, that’s a lofty goal, but with Campbell already 10 games ahead of Swogger’s pace it looks achievable.

“It’s a goal of mine to eventually become the scoring record holder at B-A, but right now, it’s not my top priority,” Campbell explained.

And for good reason, Campbell is focusing on this year. The Lady Blue Devils are ranked 3rd in the AA division of District 6, and second in their conference. B-A also has another match-up against Juniata Valley, which should be a huge game, for the conference standings as well as district rankings.

But whatever happens this year, and the next two, having a star player like Alli Campbell should help the Lady Blue Devils maintain their position as a feared team throughout central Pennsylvania.