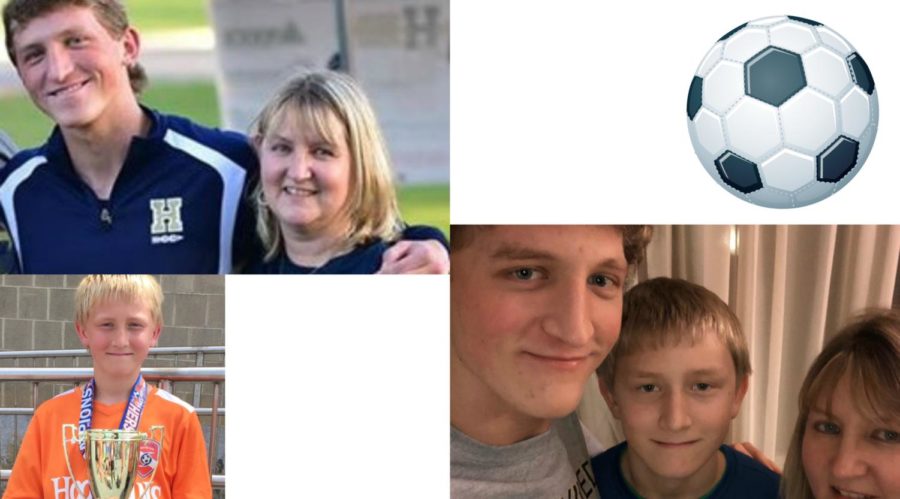 Mrs. Frank serves as the biggest fan for her sons Noah and Ryan.

On a typical day, there is no rest for Mrs. Dawn Frank.

Through all four seasons, her oldest son, Noah, usually has a sports practice immediately after school. Then, her youngest son, Ryan, usually has a practice at about 4:30. Finding time for dinner and homework can be difficult. However, Mrs. Frank always finds the time to take them to all of their practices and to go to all of their competitions.

Mrs. Frank, a math teacher at Bellwood-Antis High School and the Junior Class Advisor, has two boys: Noah, 17, and Ryan, 13. Both go to Hollidaysburg, and between the two they participate in cross-county, indoor and outdoor track, school and travel soccer, and baseball. But nevertheless, Mrs. Frank relentlessly works to ensure either she or her husband is at every game.

“Many of Ryan’s travel soccer games are in Pittsburgh, so it can be tough,” says Mrs. Frank. “Sometimes my husband and I split so at least one parent is at games and meets. In all of their years in playing we have missed only a few events, and in those cases usually a grandparent was there in our place.”

The time she has spent watching her children play their sports is rewarding, Mrs. Frank states.

“Kids grow so fast, and I don’t want to miss spending as much time as I can with them. They always look for us in the stands,” she said.

For an average family, making it to games or meets can be extremely difficult. It always takes a sacrifice to be there. But the sacrifice is worth it, Mrs. Frank believes.

“The love they show and enthusiasm toward their sports makes it worth it. Besides, this time will soon be over. Noah drives now, and I miss our time in the car talking about his day,” she said.

When it comes down to favorites, Mrs. Frank enjoys watching Noah in cross country and Ryan at soccer. Noah always works very hard to beat his own personal record and gives his best every time he runs. Ryan is fiercely competitive at soccer and is at his happiest with a soccer ball facing anyone willing to play.

“Sports are a great way to make friends and to learn to be a team player,” Mrs. Frank said. “My sons have learned that sometimes in team sports, self-sacrifice results in a better result for the team. Sports build character and discipline.”

According to those who work with her, Mrs. Frank is a stupendous role model for mothers everywhere.

“Mrs. Frank is an amazing mom and without a doubt wants to be at every single event of her sons,” says Mrs. Alli Stinson, a fellow math teacher and good friend. “As a mother of two younger children, I have not had to attend as many events, but I know the time is coming when practices and games will also be a part of my nightly routine. While it may be difficult at times to coordinate schedules and make other plans, like Mrs. Frank, there is absolutely no place I’d rather be!”