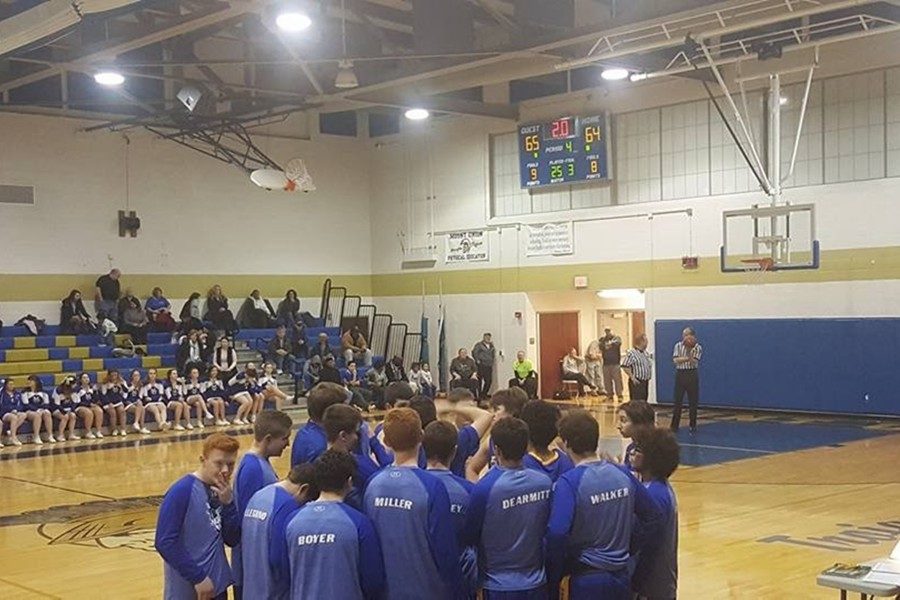 The Blue Devils draw up a defensive plan for the final two seconds against Mount Union.

Tuesday night the Bellwood-Antis Blue Devils traveled out to Mount Union to take on the Trojans in an I.C.C. match-up that came down to the wire.

The Blue Devils pulled it out 65-64 in overtime, but not before the Trojans missed two point blank shots under the hoop with just seconds left.

With 40 seconds left in regulation Tanner Worthing brought  the ball up the floor down by three. There would be two fouls before Bellwood-Antis ran an inbounds play from under the hoop that found Walker hitting a three with a hand in his face and draining the tying basket. It went in the extra period tied 52-52.

Overtime was a back and forth affair that had the Blue Devils up by one point late with the Trojans inbounding from under their own basket with 2 seconds to play. They would miss a wide open layup followed by a put back attempt, which was snatched from the air by Worthing.

Worthing finished with 16 points for B-A, which struggled to find answers for Trojan guard Mykeal Smith, who scored 35 points.