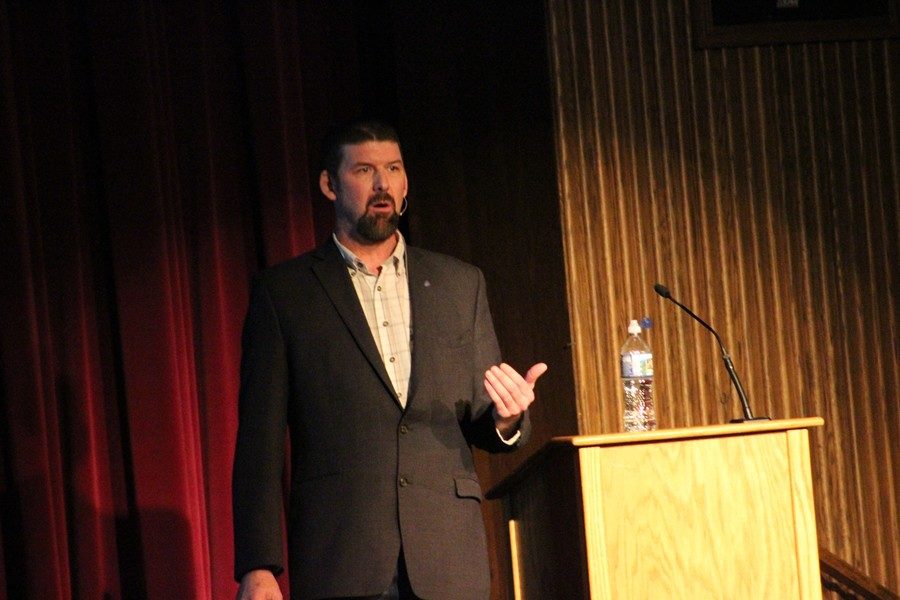 Tom Whitehead shares his daughter's story at functions around the world aimed at raising awareness for childhood cancer. (Malia Danish)

Tom Whitehead, just a regular dad from Philipsburg, PA, had his life flipped upside down in May of 2010 when his daughter, Emily, was Diagnosed with acute lymphoblastic leukemia.

He visited Bellwood-Antis last week to speak at an assembly promoting the Four Diamonds and THON, and to share his moving story. The assembly was set up to raise support at B-A for its own Mini-THON initiative, which is set to end in March with a THON-inspired dance.

With the struggle of battling cancer, the family also had a fight with bills. During their time at Hershey Hospital, an organization called Four Diamonds helped pay for meals eaten at the hospital cafeteria and also took care of the left over debt that wasn’t taken care of by insurance.

THON is an organization perhaps better known that the Four Diamonds. It is a student-run philanthropy committed to bettering the lives of children and families impacted by childhood cancer and they have now raised over 147,000,000 dollars. Four Diamonds, based out of Penn State Milton S. Hershey Medical Center, is the charity of choice for THON. Four Diamonds has a three pronged approach medical care, financial and emotional support, and pediatric cancer research.

Mr. Whitehead had come to Bellwood-Antis School District to tell his story about his daughter and how THON made it possible for her to get her treatments.

When she was just five years old,  Emily was supposed to go through 26 months of chemo therapy but relapsed on October 11, 2011 with only a 30% chance of being cured. She then went through harsh chemo therapy and was scheduled for a bone marrow transplant in February 2012. Just a couple weeks before Emily’s transplant she unfortunately relapsed again. The doctors tried to give her more chemo therapy but couldn’t get her cancer into remission. No matter what, her parents continuously battled to bring Emily happiness in her dark times, making it their goal to make her smile at least once through the day. In April 2012, she was enrolled in phase I of a clinical trial at Children’s Hospital in Philadelphia.

The trial was going to cost over $800,000 which Four Diamonds had paid full expense for. Emily was the first pediatric patient in the world to receive genetically modified t-cells to help fight her cancer. The t-cells would be injected with the HIV virus trained specifically to kill cancer cells. However, she became very ill after the doctors put her t-cells back into her blood stream. She developed a fever of 107F and remained in a detrimental state for what seemed like an eternity.

After thousands of prayers and a lot of fighting, Emily went into remission in May 2012. After her high, catastrophic fever had finally broke, she was finally 100% cancer free.  She came home from the hospital June 1, 2012 and has now hit a monumental milestone for cancer patients: five years cancer free. Once a cancer patient has hit the five year mark, the cancer will never return.

Since then, Emily and her family have traveled all over to spread the word about t-cell therapy after developing their own non-profit: The Emily Whitehead Foundation. Their mission is to save every child that they could possibly reach and because of that mission they have saved over 400 lives that would have been lost without t-cell therapy.

Mini-THON operations and entertainment chairman Mya Decker was one of many students touched by the presentation.

“It was so inspiring to hear a story of such a young girl with such a strong support system going through one of life’s toughest battles. The assembly touched the hearts of EVERYONE in that auditorium. I, on behalf of mini-THON and the school, would like to thank him for coming and sharing such a compelling story,” she said.

Now B-A is taking on Mini-THON to make a difference of its own. After Mr. Whitehead had told his impacting story, officers Mya Decker, Alivia Jacobs, and Gwen Dougherty spoke about min-THON. There will be tons of events like a glow race, the crowning of a Mr. Mini-THON, half-court shots, and tons of delicious food. Also, some of the teachers will be doing things like dying their hair, getting pied in the face, and giving up there parking spaces.

If you raise $10 by February 2, you will receive a t-shirt for the event. If you raise $25 by March 2 you will be allowed to get out of class at 1:30 p.m. on the day of Min-THON to attend the event, which begins during school hours. There will be raffles and tons of prizes, like two Penn State football tickets and a jewelry item.

“It’s for a great cause. None of the money goes to Bellwood-Antis. It all goes straight to kids like Emma Whitehead,” said Mini-THON public relations chairperson Tina Hollen. “Not only that, it will be fun, too. Think of it like a school dance. It’s entertainment.”

It’s not too late to sign up! All B-A students have the Four diamonds app on their iPad’s to help them sign up and help conquer childhood cancer.

“We’ve spent many hours making sure mini-THON will be very entertaining for each person who attends. I’m excited to see the school raise money for an imperative cause and involve everyone while doing it,” said Mya.