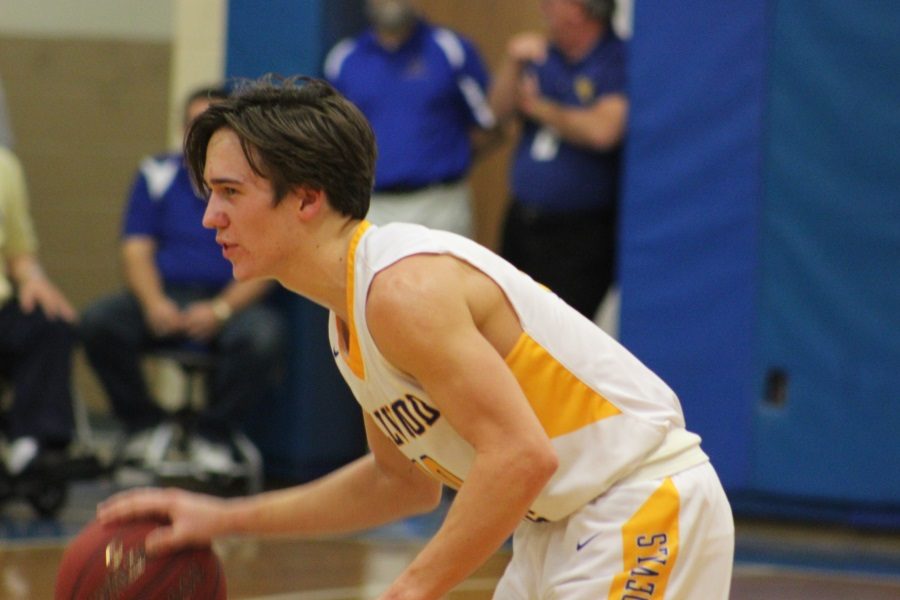 But the real story came as the boys celebrated their senior class, made up of six players.

All six, made up of starters; Trent Walker, Tanner Worthing, and Clayton Engle, as well as backups; Collin McCaulley, Jack Showalter, and Max DeArmitt, got significant playing time in the game. Walker, Worthing, Engle, McCaulley, and Showalter, all started the game for the Blue Devils and helped them out to a 17-5 first half lead.

The team then resorted to playing the rest of their starters and subbed in, TJ Wyland, Mason Yingling and Nathan Wolfe. By halftime the Blue Devils carried a 30-22 lead into the locker room.

The rout continued into the third quarter and after experimenting around with many different line ups, Coach Kevin Conlon’s Devils increased their lead by a whopping 14 points in the quarter, scoring 23 total.

With a win surely in sight, the seniors, now with DeArmitt in for Walker, returned to the court for one last shot to add to their point totals, and on a mission, to get DeArmitt his first high school points. With a second remaining, Alex Frederick, who had come on to get some game experience, fed DeArmitt the ball, but it was not to be as the senior missed the buzzer beater.

Although DeArmitt wasn’t able to score any points, he did end the game with 3 rebounds, his best on the season. Leading the team in rebounds against the Moshannon Valley was senior Trent Walker who also led B-A in points with 20. Behind Walker was Clayton Engle who finished the game with 12 points, and Mason Yingling who put home 11, including three from behind the three point line.

The Blue Devils will play against Mount Union tonight at 7:30 in their last game of the season. With the Trojans directly behind B-A on the District 6 playoff ladder, the game could mean the difference between a fourth and a fifth seed for the Blue Devils.