Blue Devils start off hot with win against Golden Eagles 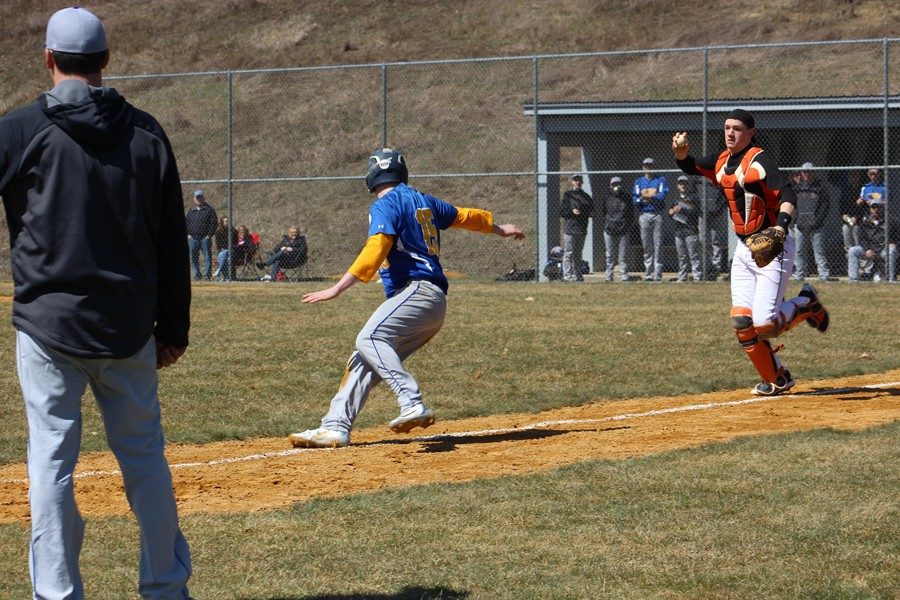 Trentin Whaley tries to elude Tyrone catcher Cory Lehman in a rundown in B-A's game Saturday against the Golden Eagles.

Any game between rivals Bellwood-Antis and Tyrone will always be a good one, but this latest meeting in baseball was truly a good match-up.

Relief pitcher Mark Stewart played an integral role in sealing the B-A 3-2 victory at Tyrone. The sophomore only allowed one run on through 48 pitches for a 2.10 ERA, striking out three batters in the process. Travis Luensmann, who started the game on the mound, earned a 1.91 ERA and struck out an impressive seven batters through 65 pitches.

However, even with B-A’s steady pitching, the Blue Devils found themselves down 0-1 after four innings after a Kevin Lehner RBI. Bellwood-Antis was quick to strike back with Ian McFarland, Trent Walker, and Luensmann batting in three separate runners to make the score 3-1 in favor of the Blue Devils. Tyrone made the game a bit tighter after Bryce Hunter slid across the plate in the bottom of the seventh, but it was too late and B-A came out of Tyrone with a 3-2 win.

Even though it wasn’t their strong suit, Bellwood-Antis’ seniors led the charge in hitting with McFarland and Walker earning a .500 batting average by the game’s conclusion. Even though the numbers didn’t show a real good game, coach Steve Conlon says he isn’t worried about the Blue Devils hitting this early in the year.

The Devils have several games on the slate this week, weather permitting. The game Monday against Philipsburg-Osceola at home was postponed due to snow. B-A has a pair of ICC games scheduled for Wednesday and Thursday against Glendale and Williamsburg, respectively, before traveling to Wingate Saturday to face Bald Eagle Area in a military appreciation/wounded warrior recognition game.