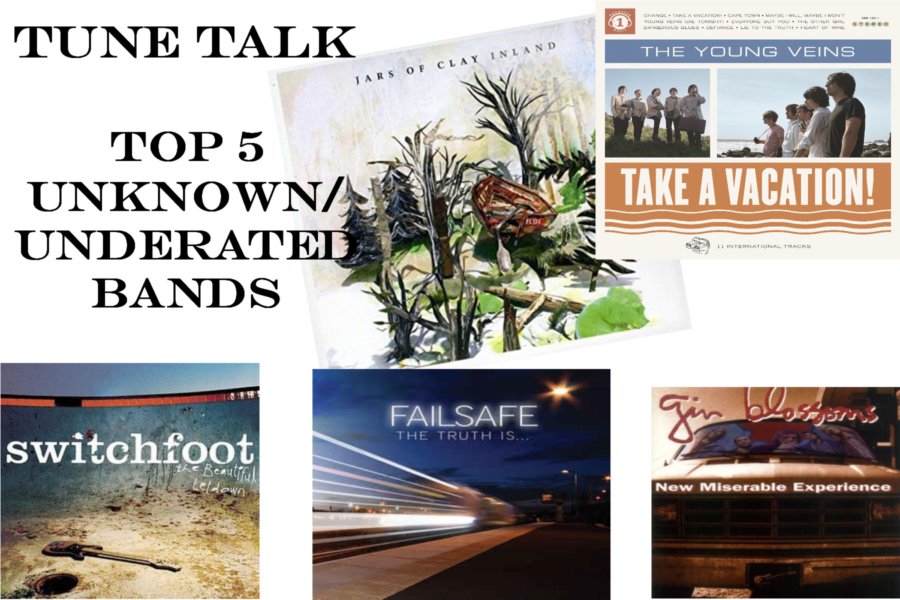 There are so many bands that people don’t know about that are great. But I could only really pick a top 5 so I hope you enjoy my list.

5. FailSafe
Nobody knew or even acknowledged this band until NBA 2K11 came out, and they were on the track list, including me. I totally would’ve taken a listen to them if I would’ve heard about them before this game, but thanks to this game, I found these guys. I planned on getting their best known album, “The Truth Is…” but it’s hard to find around anywhere since it’s an unknown band, they’ve got songs like “Only if We Learn,” “A Common Goal,” “Without Warning,” and my personal favorite “Hope.”

4. Switchfoot
This is a band I actually grew up with, and I thought these guys were as big as Nirvana whenever I was younger. I was about 7 or 8 years old, don’t judge me. But I used to love listening to “The Beautiful Letdown” by these guys and there isn’t a song on this album that I don’t like, can’t say all their other albums are great because I haven’t listened to them all in a pretty long while. But I loved “This is Your Life,” “Meant to Live,” “Dare You to Move,” “Gone,” “On Fire,” but I would say that my absolute favorite is either “Gone” or “Redemption.”

3. Gin Blossoms
You will not recognize this band at all whenever you see the name but once you listen to a few of their songs, you’ll remember their old greatest hits that were always being played on the main stream radio. These guys literally had no name but a huge love for their musical style since their new stuff was dated back in the 90’s which just so happened to be the same time around whenever Nirvana was around. I only know of the Gin Blossoms on album and that is “New Miserable Experience,” which my dad didn’t even own, he only downloaded the one song which was my favorite growing up “Until I Fall Away.” But now that I’ve looked more into them I would definitely say that “Found Out About You” has to be my updated favorite.

2. The Young Veins
As I’ve mentioned this band before in another Tune Talk, of course I would put them on the list, since you know that I love this band. This band is only underrated because they got a lot of hate from Panic! At the Disco fans, so they were never really given a chance. They only have one album because nobody gave them a chance if you’re going to have a listen to The Young Veins and need some song recommendation then I would highly recommend either “Cape Town,” “Take a Vacation,” or my personal favorite “The Other Girl.”

1, Jars of Clay
Yet another band that I grew up loving whenever I was young. I know all of these guys’ songs and my dad owns all of their albums, even their new material. But if I would have to choose a favorite album, I would instantly go for their newest one which is “Inland.” The way they went with this album was just beautiful in my own opinion. This band has been coming out with countless albums since the late 90’s and still has been coming out with new material since about 2014. This band is only unknown due to their genre, alternative rock, and if you ARE listening for the first time I highly recommend their newest song either “Human Race,” or “Loneliness and Alcohol.”