Debate continues over the value of teaching the bard's classic works 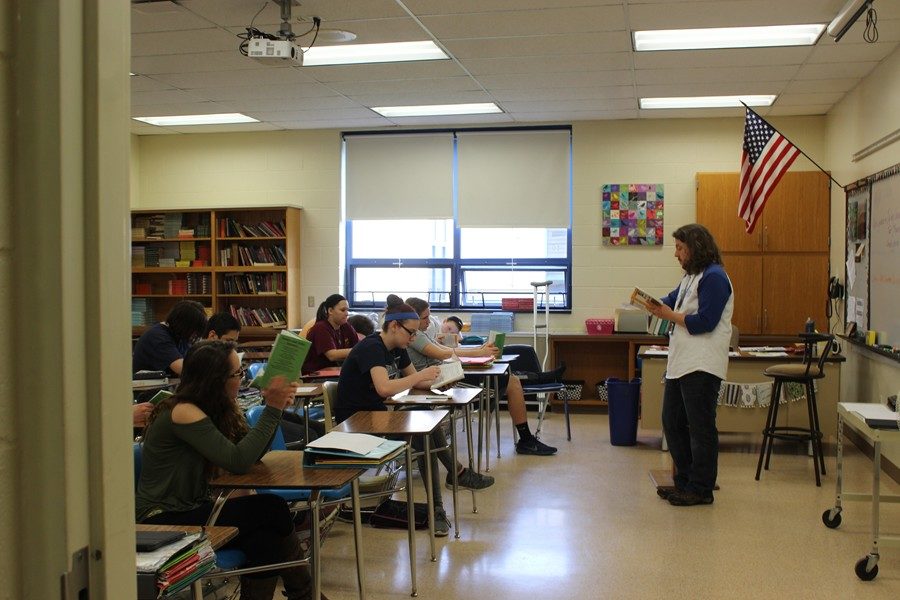 Students at all four grade levels at Bellwood-Antis read Shakespeare every year, including plays like Romeo and Juilet, which Mr. Stewart does with this class.

Before you escape the American education system, you’ll probably have some overused expressions drilled into your head. For example, everyone knows that mitochondria is the powerhouse of the cell. In the same vein, everyone knows why we are taught Shakespeare– because he is timeless and universal.

Since Shakespeare is a required part of the core English curriculum, it’s likely that high school students will read at least one of his plays each year. And each year, students dread parsing out the dense and archaic language of Shakespeare– hence, resources such as No Fear Shakespeare and No Sweat Shakespeare.

Although Shakespeare’s plays are great works of literature with relevant themes, we may be better off searching for these things in more modern, accessible works. To teach or not to teach?

There are several unique virtues of Shakespeare to be considered outside of being timeless and universal. To start, he was an innovator of the English language. He invented over 1,700 words that are still commonly used today. He also coined many phrases that people use without realizing that they’re quoting Shakespeare– for example, the phrase “there’s method in my madness” originated from Hamlet.

Similar to how we use his words and phrases every day, we also borrow from his famous stories. They have been adapted time and time again. For example, The Lion King is based on Hamlet. West Side Story was inspired by Romeo and Juliet. There are plenty of other examples. Truly, as a writer and as a pioneer of the English language, Shakespeare is embedded in pop culture.

These plays would not be so widely taught, referenced, and adapted, however, if they did not have value on their own as great pieces of literature. Shakespeare’s work presents multifaceted characters and twisting storylines that have kept readers engaged for generations. He was a great poet and was able to say what he wanted to in a memorable way. Many students find the dire drama of the stories and characters to be engaging.

“There are lots of themes that are timeless and universal, but if you don’t write it well, it’s not going to stand the test of time,” said Mr. Kerry Naylor, another high school English teacher at Bellwood-Antis.

Despite any hardships of reading Shakespeare, many teachers find him to be a great teaching tool. “It’s probably my favorite thing to teach because it covers so many things. If you look at the unit I do on Shakespeare, we go over terms and devices that are used in the play itself,” said Mr. Naylor.

And once you get past the language, Shakespeare’s plays are just plain fun to act out and discuss. “I think that Shakespeare is actually my favorite author to teach. I love reading the plays with my classes and the fact that everyone can get involved,” said Mrs. Cunningham. “My classes always seem to be a bit more enthusiastic when we are working through a play, and we always have some great discussions.”

A diverse body of students may be able to relate emotionally to Shakespeare, but they may not always be able to relate to him culturally. This is one of the limitations of reading Shakespeare every year in school. Other cultural perspectives are just as important, after all. Minority students deserve to gain insight into their history and culture through these works, and non-minority students may not have the chance to explore these differing perspectives after they graduate. Out of the 10 most commonly taught books in public schools, nine were written by white men and one (Harper Lee’s To Kill a Mockingbird) was written by a white woman.

“If you were going to have a Mount Rushmore of people that you should teach, I think Shakespeare is definitely one of them. But I think there are other writers from other cultures you would have to consider for those as well,” said Mr. Naylor.

Shakespeare is not the only one who has ever written complex, relatable characters and engaging stories. White men and occasionally white women are not the only people who have ever written a story that high school students would benefit from reading. Here are some examples of novels that could be taught:

The Hate U Give is black author Angie Thomas’s debut novel. It confronts the very real and topical issues of police violence and racial bias in our justice system. Educators are recognizing this early 2017 release’s value as a teaching tool—there are multiple teaching guides that have been published. This novel is also highly readable, even being described by some as “unputdownable.” Thomas’s The Hate U Give is a great option to educate high school students on some issues faced by the black community, told from the point of view of a black person.

Ibi Zoboi’s American Street also deals with racial and ethnic issues, but in a different way. The main character, Fabiola Toussaint, and her mother, emigrate from Haiti to Detriot. However, Fabiola’s mother is detained. Fabiola must learn to navigate America alone while living with her cousins. In reading this novel, students can learn about the issues faced by immigrants in America along with Haitian Voudou beliefs. The novel is based on Zoboi’s experiences as an immigrant.

Kitchen is a Japanese contemporary that confronts the universal themes of loss, grief, love, and the healing power of friendship. Leading novelist Banana Yoshimoto’s writing style is gorgeously poetic. Although this novel does not confront any sociopolitical issues, educators could consider using it as a sample of Japanese writing, lifestyle, and culture.

The novels listed above are more suited to high school students. Donna Gephart’s Lily and Dunkin could be enjoyable for both middle school and high school students. Lily is a transgender girl and Dunkin is a boy struggling with bipolar disorder. The two characters form an unlikely friendship while facing the trials and tribulations of 8th grade. Gephart herself is not transgender but researched extensively enough to write an accurate portrayal.

Although it is important that students read Shakespeare and other commonly taught classics, it is also important that students read texts from culturally diverse perspectives. This is why we should continue to teach Shakespeare, but mix in a wider variety of works as well. In a world where we tend to hold onto our prejudices and mistrust those who are different from us, it is becoming increasingly important that we understand each other. Each student would be able to appreciate Shakespeare while also becoming a more culturally conscious person.