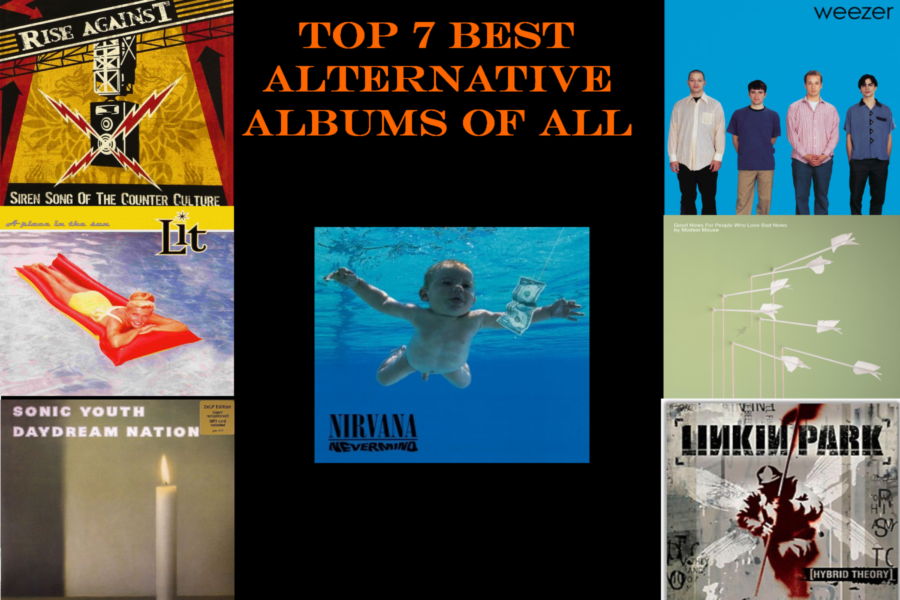 Alternative music, in my opinion, is the best music genre of them all. There hasn’t been a genre that has really put me over the top since I discovered alternative music. This is my list for the best alternative albums that I have listened to. This isn’t an official list or anything, it’s just my opinion.

7. Good News for People Who Love Bad News by Modest Mouse- 2004
This is not a very well-known band, but once you hear the singer of this band’s voice, you can’t really compare it to any other voice. Not only was this very album nominated for a Grammy award, but it’s song, which is my favorite, “Float On,” was featured on the sensational video game that was huge whenever it first came out, RockBand 2. Thanks to that song, it really kicked me into Modest Mouse and I personally took a liking to their songs “The Ocean Breathes Salty,” “Bury Me With it,” as well as “Dance Hall.” If you really like the Beatles, these guys kind of have a Beatles sound to them. This is definitely not a band that will disappoint you.

6. Hybrid Theory by Linkin Park- 2000
As anyone would suspect, this is Linkin Park’s best work. This is where it all really started for these guys as  “One Step Closer,” and “In The End” came out, which everybody has at least heard once. We also have some great songs like “Paper Cut,” “With You,” “Points of Authority,” and “By Myself.” This is and will always be Linkin Park’s best work, other than their 2003 album, “Meteora,” which I would say is my favorite Linkin Park album. However, “Hybrid Theory” will always be number one.

5. A Place in the Sun by Lit- 1999
This is yet another unknown band until RockBand 2 came into play and featured their biggest song off of their best album. But to be honest, these guys have to be my favorite discovery from RockBand 2. If you had to compare these guys to anything, I would say they’re most likely similar to Blink-182 than anybody else, but their music is definitely heavier than Blink-182. RockBand 2 of course featured my favorite song, “My Own Worst Enemy,” but they also have some other great songs I had a listen to recently like “Four,” “Down,” “Miserable,” as well as “Zip-Lock.” I highly recommend this band if you really like Blink-182 style music.

4. Siren Song of the Counter Culture by Rise Against- 2004
Rise Against is an alternative rock band that’s been around since forever. I didn’t officially get into these guys until I actually started playing Madden NFL 12 in which their song, “Architects” was played while you were in the menu or in the roster. I’ve loved this band ever since I played “Give it All,” which is on this album on RockBand 2. This album also features great songs such as “The First Drop,” “State of the Union,” “Paper Wings,” and “Blood to Bleed.” This band is just so incredibly iconic, not only with how the band plays, but there’s also the great vocals done by Tim Mcilrath. Of course,  the guitarist is also very memorable and talented, Chris Chasse.

3. Weezer by Weezer- 1994
We’re talking about Weezer here. The band that everybody said they loved because they were classified as “nerds in a rock band.” This album is by far, in my personal opinion, Weezer’s best album. We’re talking songs like “My Name is Jonas,” “No One Else,” “Buddy Holly,” “In the Garage,” and my favorite, “Say It Ain’t So.” These guys featured somewhat of a similar sound to Nirvana, of course they had their own separate type of style and gained all kinds of new bound fame along with this new album.

2. Daydream Youth by Sonic Youth- 1988
Sonic Youth is one of the biggest bands of all time in alternative music, way before Nirvana’s time. It’s basically the Metallica of Alternative music. If you ask me, Sonic Youth was the beginning of all alternative music, I think so personally. Not only did this band begin in 1981 and stayed strong until 2011, but this band also managed to have a great influence on Nirvana’s bass player, Krist Novolselic, but also Nirvana’s front man, Kurt Cobain. This album featured great hits such as “Silver Rocket,” “The Sprawl,” “Cross the Breeze,” “Eric’s Trip,” “Total Trash” and my favorite which is “Teenage Riot.”

1. Nevermind by Nirvana- 1991
As it’s said by everyone back in the 90’s, if there was a voice or band of a generation back in the 90’s it would be Nirvana. Nirvana went from 0 to hero as most people would say since their first album did not get much publicity for Nirvana, “Bleach,” due to it being on a low grade record label which was known as Sub Pop, but for this album, Nirvana officially signed with Geffen Records who also signed a bunch of big bands such as Guns N’ Roses, Weezer, Blink-182, Aerosmith, Eagles, Rise Against, Counting Crows, and so many more other bands. On this album we got huge hits such as “Come as You Are,” “Lithium,” “Drain You,” “In Bloom,” “Breed,” “Polly,” and of course the one literally everybody knows, “Smells like Teen Spirit.” This album went double platinum within 8 weeks of its release, which of course is a big deal, and Kirst Novolselic, the bass player, even stated that knowing it was certified double platinum is “Indy gold.” This album will forever and always be number one for all alternative music.