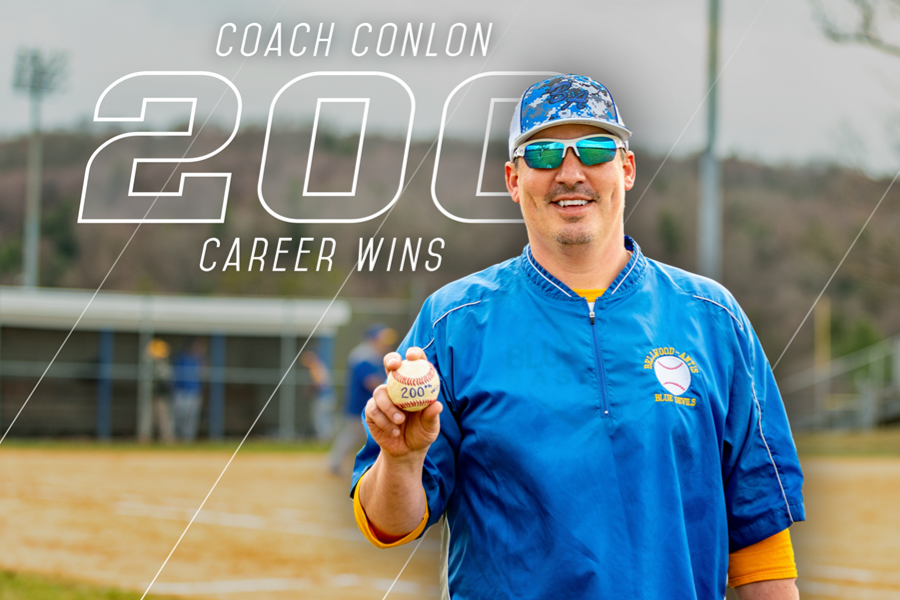 The Bellwood-Antis boys baseball team didn’t have much of a challenge Monday night against Glendale, winning both games of the double header, 16-0, and 15-0, but that didn’t mean that the games were meaningless on the Blue Devils schedule.

Head coach Steve Conlon reached 200 career wins after the first game played Monday, and 201 after the second one. With a fifteen year coaching career under his belt, Conlon has been B-A’s coach since 2003, where he was able to lead the team to a state championship in his first year at the helm, but Conlon maintains it was never about the wins from the beginning.

“When I first started, I never really thought about the wins and the losses. That is still true today. As a program, we strive to put a quality team on the field each season, if we can do that, the wins and losses take care of themselves,” Conlon explained.

And Conlon has been able to do this his whole career. Since he took over in 2003, Conlon has led the Blue Devils to nine winning seasons, two PIAA final fours, and one state title. Yet, Conlon doesn’t want to take all the credit for himself.

“I attribute the success of the baseball program to the kids that were here at Bellwood,” Conlon said. “We have quality kids, not only as players, but also as individuals. They put the time in to become good baseball players.”

Nate Plummer played under Conlon as a player, and after playing in college at the University of Pitt Johnstown, he came back to coach under Conlon. Plummer, an assistant coach on this year’s team, respects Conlon as a coach and has seen his evolution in his 15 years better than anyone else.

“His coaching techniques have changed with the ages… but his ultimate goal of winning each game has never changed,” Plummer said. Plummer’s praise didn’t stop there, “As a former college player and a player under (Conlon), it’s the drive to win that stands out most to me,” he continued.

Coach Tom Partner, a B-A middle school teacher, has coached with and against Conlon, and it’s an experience that has impacted him deeply.

“His 200th win represents his commitment to the program and his drive to the get the very best out of his players,” Partner said. ” I coached against him for a couple of years before I was fortunate enough to join his staff, and it has been a true pleasure to work with a coach who not only still is a competitor after all of these years, but also, more importantly, a great role model for these young men.”

Jack Showalter, a key player in this year’s 2017-18 Blue Devil baseball team, shined a light on a different characteristic of coach Conlon. “This milestone shows he’s a good coach because he makes the good players play great and the average players better than they are,” Showalter explained.

With this year’s season reaching it’s mid-point, Conlon will have the chance to add a few more wins to his resume, and with the team’s current record of 7-2, it’s not unreasonable to think Conlon might have another PIAA playoff run up his sleeve, but one thing is for sure, coach Conlon will take it one game – or win, at a time.

“I look forward to coaching many more seasons here at Bellwood,” Conlon concluded.