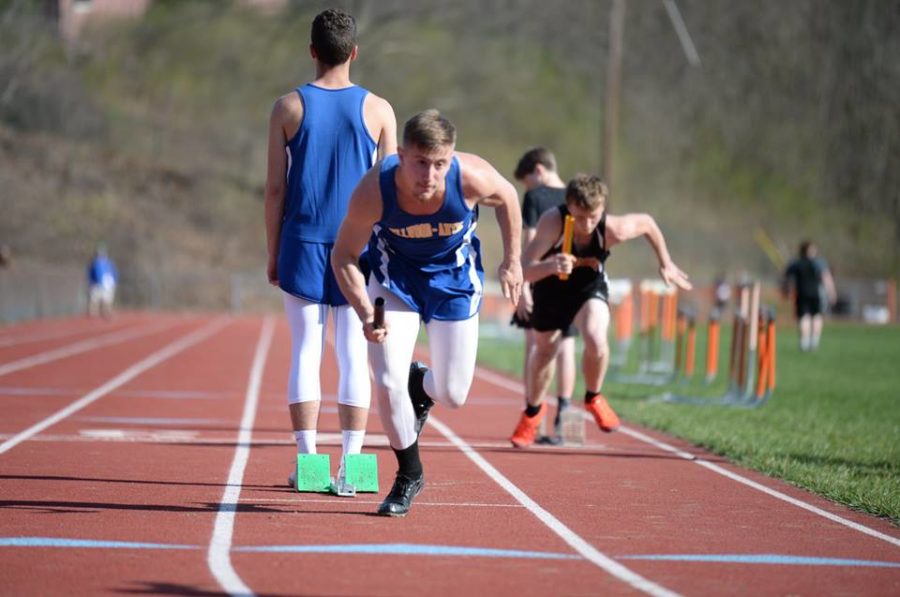 Nick Watters sets out as the first leg in the 4X100 relay yesterday against Tyrone.

Yesterday’s meet between Bellwood-Antis and Tyrone was a split. The Blue Devil boys were able to take an 85-65 victory behind two wins from Shawn Wolfe in the 100 and 200 meter dashes and two wins from Dylan Wilson in both the hurdles.

The Backyard Brawl victory allowed the Devils to finish the season a perfect 15-0.

It’s the fifteenth unbeaten season for the B-A boys track team and the and the eighth under head coach Nick Lovrich, who took over the program in 2000.

They never get old, and all come with challenges.

“I’m very proud of the effort we have gotten from our team this year,” said Coach Lovrich. “This may have been one of the toughest springs because of the weather, but they persevered and displayed a lot of mental toughness.”

Coach Lovrich said an undefeated season is always on the list of goals his team sets each season.

“It’s always nice when you achieve those goals, especially when you face adversity. Our seniors showed great leadership, which led to the team buying into those goals,” he said. It was a total team effort that helped us get our undefeated season.”

Where Bellwood-Antis won the meet was in the field, sweeping every single field event. Chris Wertman won the shot put with a throw of 43-11.5, Jared Zitterbart won the discus with a throw of 100-8.5, and Braden Heisler capped off the throwers with a javelin throw of 145-5 to win the event. Dominick Faith cleared a height of 11 feet to win the pole vault.

Tanner Worthing was the only runner other than the aforementioned Wolfe and Wilson to win an individual event, with a win in the 400 meter dash. The Bellwood-Antis 400 and 1600 relay teams picked up a couple of wins.

The BA Invitational is the next meet for the Blue Devils which will be on Monday after school. Congratulations on an undefeated regular season for the boys track and for a great season for the girls track team.